Today I'm going to talk about politics. I've been holding on to my anger on this issue for awhile, but not anymore. Something needs to be said. Enough is enough.

What am I talking about? Well, my annoyance over how petty the political system has become lately. For starters, I'm tired of twisted political ads that try to lump all republicans or democrats or women or gays or Christians or __________ into one. Don't know what I'm talking about? Check this out: 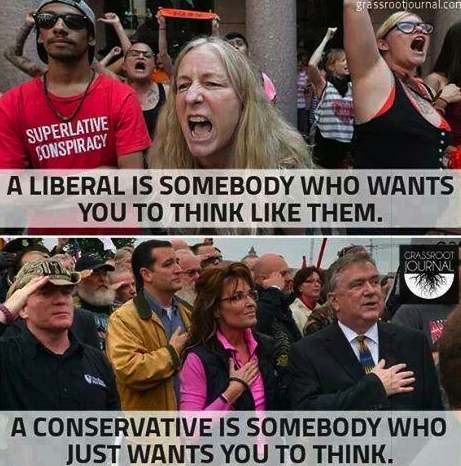 What the cookie monster is this? I've been seeing it float around on facebook and pinterest. Every time I see it I loose a little more faith in humanity.

I'm pretty sure both liberals and conservatives want people to think for themselves. Unless they are corrupt, and I've met both corrupt liberals and conservatives. Liberals are not brainwashed zombies--nor are they trying to brainwash you. Now, notice I didn't say politicians aren't trying to brainwash you, because I think some of them do. Hence this ad that is trying to say something that isn't true made by a (probably) republican idiot. I'm so tired of these ad hominem ads.

I'm tired of memes that just play on generalizations. Let's discuss the facts and have open, candid conversations. I'm a conservative and I love thinking. I love discussing. I'm not for dirty air or dirty water and I'm not waging a war on females, gays, or any other minority. I want equal rights for all. I respect president Obama even if I don't agree with a lot of his politics. He was elected by the majority of Americans--he's what America wanted. I'm tired of being told I must be racist if I don't like his political stance.

I'm also aware that everything isn't Obama's fault. I'm so tired of seeing people blame Obama for everything. He may be president, but he can't control this nation! He's one man. Sure, he's not perfect, but the USA runs on more then just the whims of one person. I think a lot of politicians in the white house have forgotten to look out for America and are instead looking out for themselves. They take fancy tax-paid vacations and vote themselves bigger salaries and make themselves exempt from laws they pass on everyone else. Lots of republicans and democrats do this, not just one person.

Are you tired of this? Because I sure am.

I wish I could find a republican group on Facebook that didn't use the term "all democrats do ______" OR a group that didn't make fun of democrats. Or call them stupid. I know Democrat groups do the same thing to Republicans. I hate it when they both say "all Republicans hate women" or "Democrats want to destroy our nation". SO ANNOYING. Can't a group just exist without trying to tear down the other side? I think about it like marriage. My husband is one side and I'm another. I don't spend my time tearing him down. I don't use words that mean "you always do this". I think the democrat and republican parties need to go to marriage counseling.

If you think about it from a marriage perspective, it really makes sense. Republicans are one spouse, democrats another. In marriage you don't accuse the other. You don't make sweeping generalizations. Instead you try to communicate and bridge your differences because you realize you are all on the same side. Both political parties are fighting for the same thing: a better America. And if one spouse becomes so self-absorbed and starts smearing the other one--that only alienates and furthers the gap. We need to be working together and loving each other for America. Sure, we won't always agree: but we've lost our respect. And because of that we've lost our ground to talk on without sneering at each other. It's like in a marriage before the war starts.

It's sad. I hope we can stop pointing fingers and start working on actual issues.