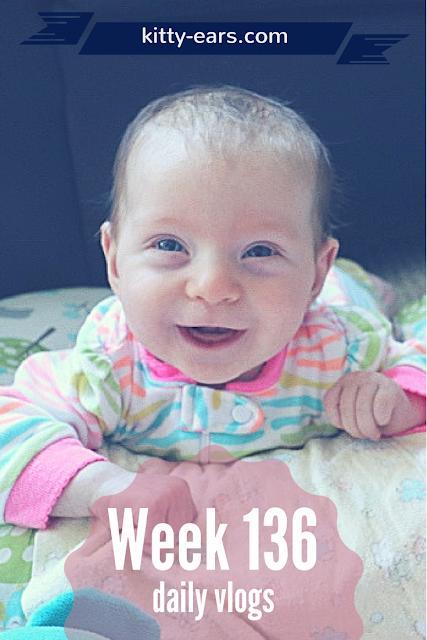 I have to realize that I do get into a postpartum funk. And with Reuben, it took almost a year to come out of. With Rebekah--four months. I think every time I have a baby (no idea if this is true for others) my entire life changes. The ebb and flow of my days change. My time gets crunched and doing simple things like showering, eating and cleaning become alpine climbs. Next time I have a baby I want to remember this and give myself more grace and ask for a lot of help. 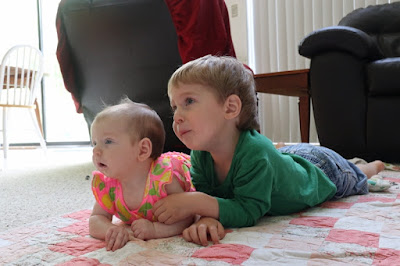 I wanted to talk a little about birth. I have both Reuben's and Rebekah's birth stories on my YouTube but I wanted to talk about birth in general. I want another baby (but not right now, I would like to wait a year or two at the least) and I no longer have debilitating fear feelings surrounding the idea of birth. Isn't that great?! I mean, I am not looking forward to pushing a large human out of my delicate bits, but I no longer have soul crushing anxiety and fear when I think about it.

Pregnancy is another story, however. After three miscarriages before Reuben and one after, I have a bit of anxiety when I think of going through pregnancy again. Also gestational diabetes is NOT fun. It's awful. Yes, I was able to manage it with diet and I am lucky. But poking my finger every day three times a day was horribly traumatic for me. I would have panic attacks just thinking of the next day of pokes. I hope I do not have to go through that again. I also hope for a uncomplicated pregnancy. So many things can go wrong. I remember with Reuben I had marginal placenta previa and panicked so hard about that. I did not have it with Rebekah, but had other complications with her. I am going to start praying for God to get me through my next pregnancy if I am blessed with one. Growing a human is hard. 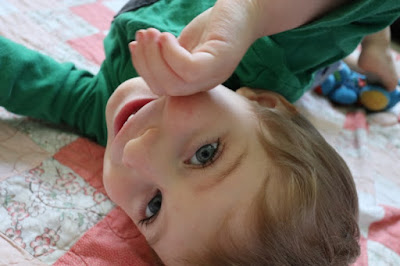 Something else happened this week that I am just in utter shock of. Reuben requested to sleep in his own room! All by himself!!! And the last two nights not only has he done so, but he has slept through the night and woken up without crying. I am thunderstruck. I expected him to desire his own sleeping space around five, not at almost three (in two months!!! My baby is growing up.). But it has been a much needed break for me and I really am in shock. The first night it happened I woke up a few times to check on him. The second night I only woke up once to check on him. He has never slept apart from me (or at least out of the same room) for his entire life. I know it's only been two days, but it's been an interesting process, to say the least. We are still taking it day by day--I know bedtime won't always be easy, but when it is--it's nice.

Now all we need is to get Rebekah in the crib in our room and husband and I will have a whole bed to ourselves. Can you imagine such bliss?

Some food I've been enjoying this month has been fresh made sweet tea (stevia sweetened, we are still keto) and yogurt with husband-homemade granola and fruit. The later have been breakfast staples this week! I feel on food cloud nine. Those two things are food items I look forward to almost daily and have not grown tired of yet. 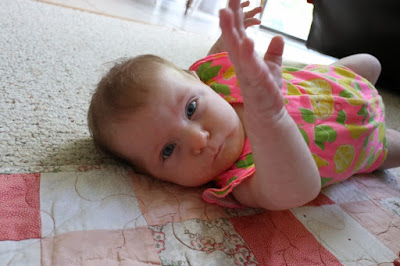 Rebekah turned four months last week and I am waiting for her four month sleep regression. I remember it being one of the worst with Reuben where he didn't sleep for 48 hours and I am trying to prep food and prepare for it. So far nothing, but her last sleep regression was a whole week later than expected so perhaps this one will be also. That means it will hit today or tomorrow. I am prepared! Her sleep regressions so far have been how Reuben normally used to sleep, so its not that bad. I mean, it's hard that she does not sleep much during the day, but she at least sleeps at night (unless regressing). This somewhat allows me to be a functioning human, unlike Reuben who at her age never slept and near about killed me. I am not joking.

Another thing I talked about last time was sex after pregnancy. It hurt for a whole year (like I would sob after) with Reuben. It's still painful postpartum now but I am not sobbing. More like just not enjoying it and being sore during and after. But making time for intimacy is 350% harder because we have two kids not just one! My vaginal recovery has been much improved this time even if it is not perfect. So there is that, if you wanted to know.

And that's the end of my meandering update. Until next time! 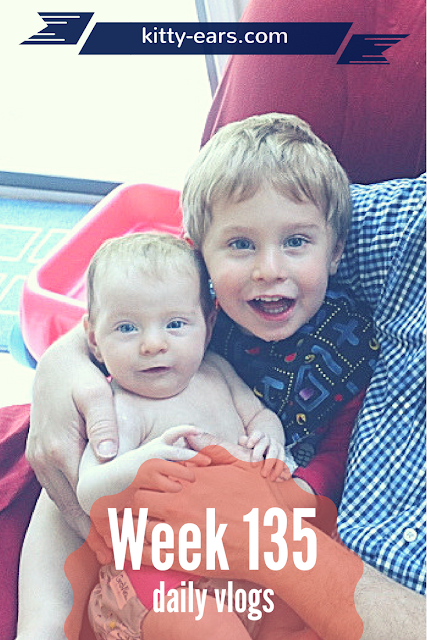 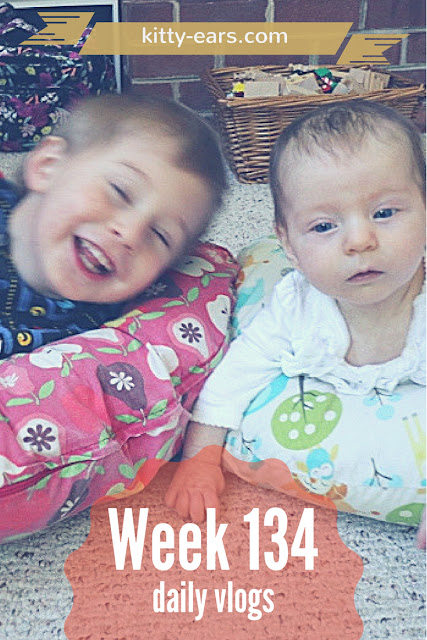 I only ended up taking a two week break from vlogging, but it was much needed. Back to doing it whenever I can.

Thoughts on Motherhoold of Two Small Ones

I feel like I have finally grown up. I'm a responsible adult with two kids. I know how to cook three meals a day, meal plan, do laundry, soothe a tantrum, make beds, wipe mouths, organize a fridge and feel creatively stifled all at the same time. I know how to have good intentions and never follow through with them.

Sometimes I feel like I am a machine. My machine runs off of hastily consumed food and cold coffee. My levers read "bathe toddler" and "change sheets" and the noise that consumes my cogs is a mix of a baby fussing and pots clanging. This sound is played over and over again and my hinges are wearing out. I am derelict.

Yesterday I went to the store for groceries without brushing my hair. I got home and looked in the mirror and did a double take. I wanted to laugh at myself, but it was just sad. Why didn't anyone tell me that I looked legitimately homeless?! How could I forget a simple thing like brushing my hair? What must the cashier have thought? 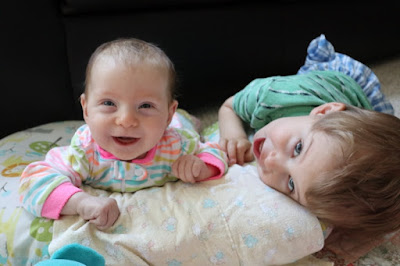 There are so many thoughts buzzing in my head. Don't forget to switch the laundry. The dishes need to be done. Reuben needs to be changed into fresh clothes. I need a bath. I need to prep some food. The weeding is way past due. Managing a household is a full time job. It's also a lot of repetition and routine. A juggling act.

I couldn't do it without God. I need him every hour, every day, every moment. Every sunrise that creaks over the horizon brings fresh prayers to my mind begging him to give me the strength, the stamina to make it through. "Making It" has become the score that I tally my life by. How much TV did we watch today? Was take out part of a meal? Did I read him any books today? I feel like a failure of a mother when the TV is on and he eats Hardee's for supper while I tell him I am too tired to read books. But I feel like a worn out, tired and stressed mom when he eats homecooked peas and chicken for supper while I wash the dishes. Many days the books we read are piled all around the living room in discordant heaps, but I still feel unhappy.

I am struggling to find balance. And peace, inwardly and outwardly.

And where is my hairbrush?

Keto Breastfeeding and What I Eat in a Day 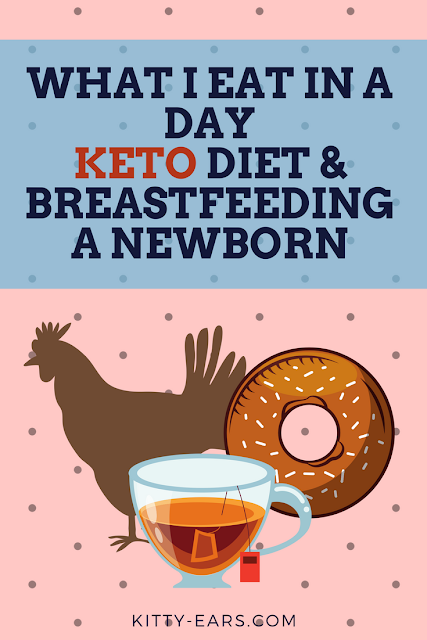 I was nervous when I started breastfeeding on the keto diet. Would I make enough milk? What if I had low supply? Luckily I make copious amount of milk and still breastfeed my toddler at least once a day.

Here are two videos: one of what I eat in a day while breastfeeding (Rebekah was two weeks old when I filmed the WIEIAD video) and one of what I do to keep my breastmilk suppy up while on keto. Hope they are helpful and informative to you if you are breastfeeding, or thinking about breastfeeding while keto! It's totally and completely safe and possible. 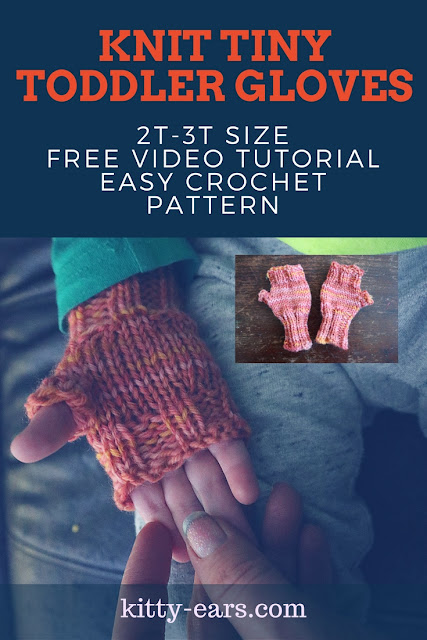 Reuben needed some gloves for playing outside--so I made him some! I made these for him before I had Rebekah, but am just getting around to posting the links on my blog. He requested "orange" ones and thus I found some 4.0mm knitting needles and some orange worsted weight yarn and got to work. And he loves his gloves!

You can view the video tutorial below, and/or download the free PDF pattern from Raverly here!