Last year we did a budget series where I posted what our small family of three spent each month. I only made it through six months of reporting before keeping track of all the statements and paperwork got to be too much.

Thus the 2017 budget series is beginning! I had a lot of questions last time, so I will do a quick Q and A.
If you have any other questions I would be happy to answer them. 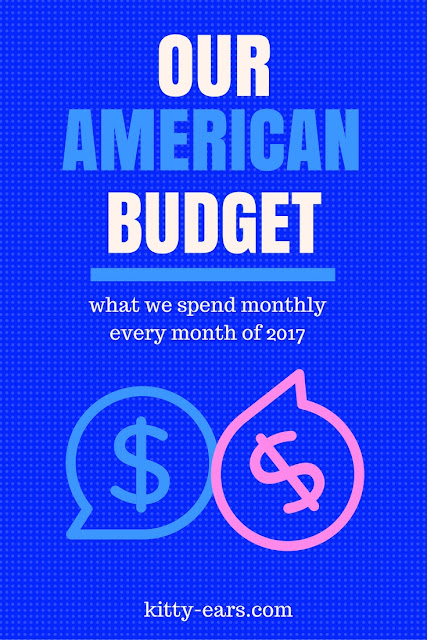 Our bills for this month are:
Only one internet provider can service our area and it's SO EXPENSIVE. I also think our YMCA bill is frivolous but husband loves going to the gym, and we have a family membership so we can bring Reuben swimming sometimes. I'll be honest, we have gone to the gym twice this month. Maybe we should cancel this? Sometimes we go twice a week but some months we don't go at all. It depends on the weather and how busy we are. Our water bill is also expensive, we just found out our downstairs toilet has been running.

I've started being able to eat at La Carreta (it's a tex-mex local chain restaurant in our town) and this is awesome because my husband loves tex mex and so do I! We ate out there twice this month, once at Zoe's Kitchen, once at Chipotles, and once we picked up two pizzas (one gluten free one regular). We usually eat out only once per week but as you can see we got a bit stir crazy...

We shop almost exclusively at Krogers for our organic food when the farmer's market isn't running for the winter. Some of the other stores we go to are the Health Nut, a local crunchy store, and Fresh Market. Fresh Market sells organic coconut milk and also the only bread I can eat (its vegan and gluten free) without getting sick. So I go there every other week to stock up on milk and bread! 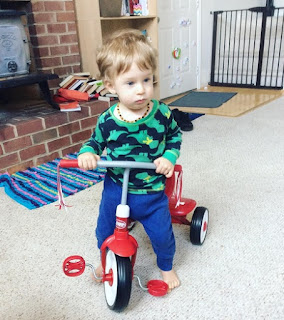 We bought Reuben a bike this past week! We went to a thrift store first, but couldn't find anything. We ended up buying him this awesome bike (and also a tiger plushy) at Toys R Us for $62. We wanted to get him a bike because he's always climbing in his toy wagon demanding to be pushed, and I thought this way he would be self-mobile. The bike is a tad too big for him but he loves climbing on and off and putting things in the trunk. He'll grow into it soon. I also took him on a mommy and son date to Panera and Daddy took him to Walmart were they bought a kite, bubbles, and a Frisbee. All in all it totaled $94 when we were done!

Carolynn ($281)
I bought gas, and a lot of babysitting, and pair of leggings from a friend who works for an MLM company to support her. We had a babysitter six times this month, for four hours each time she came out. Don't you go thinking I got a lot done through, because I had the raging flu the first two weeks and slept every time she was here. We pay $10 an hour so $240 of my personal money all went to babysitting. It was worth it. Actually, my sitter is downstairs with my son right now, giving me the ability to write this. Yay!

Brian ($124)
Daddy buys a lot of miscellaneous things. At least, from my perspective he does! He went out to eat (when it's by himself it counts as personal money) a lot. His favorite place is McDonald's, and because of soy and dairy contaminates, neither Reuben or I can eat there, so he usually takes himself there for a solo breakfast on the weekends or before work sometimes. He also bought some random things off Amazon for working on the electrical projects he does, and he treated himself to a pizza one night when I was sick.

A lot of people last year were curious about what we tithe per month so I decided to include it. I feel a bit hesitant disclosing our tithes, as I do believe it is between our family and God, but it is part of a budget too.

That brings our total spent in January to $1918, $100 over our budget of 1800. But that's okay. It happens, and I think we did well. Our overarching goal is to stay under $2000, and we did that. I am pleased and very happy, and I hope husband is as well. This saves $82 for our swingset/fence purchase that we plan to put up in July-ish.

So that is what we spent this month, in total.