A look at our American budget

So this year one of my husband and I's dreams is to drastically reduce our budget. Last year we spent a lot. We had a baby, so it was to be expected. This year we want to reduce spending to save up again to have another baby in 2017. Our financial goal is to spend no more than $2,000 a month. That includes everything, from bills to food to personal and baby expenses.

We started this goal on the 16th of March! Before we started, I took a look at what we spent from January 16 2016 - February 16th 2016 to see what we were spending monthly. Currently we try to be frugal, but we don't really have a set budget. Here is every penny we spent mid January through mid February. 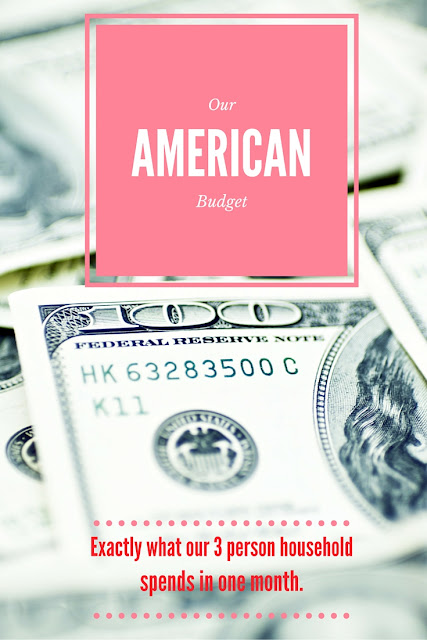 Bills
I don't see much we can remove from bills. I stopped going to the Y after Reuben was born and Brian removed me from the subscription. It was 75 for both of us, only 46 for just him. He goes 3-4 times a week and enjoys it. The electric bill should drop when spring hits and we are not using the heat, and our water bill comes every two months, so it was really $33ish a month. For our cell phones, we have republic wireless and I actually find that bill quite reasonable, so not much I can tweek there.

During this month we spent 446.47 on Reuben. He learned to crawl in December so in January we bought him a baby gate. We also purchased a highchair for him as well since he hit 6 months and we wanted to start solid food. There were probably a lot of miscellaneous things purchased too, like I remember buying infant Vicks vapor rub and baby Tylenol when he was sick, and a hat for him because he outgrew his 0-3 month size. We also went to the doctor once for him in the previous month and that bill is included here since it came a few weeks later. The baby expense category should drastically decrease, as the only things we will need for Reuben in the next year is a new car seat (he will outgrow his infant one that daddy has in his car) and perhaps some more age-appropriate toys as he nears 1 year that I am sure one of his grandmothers will buy. We have tons of clothes for him as he has four male cousins!

Food
Food is the place in the budget that I think needs the most work. For clarification, this was my birthday month, so we did go out to a special place for my birthday, resulting in a higher than normal eating out budget. We try to keep eating out under or at $100 a month. Brian also does not pack a lunch, he eats at his work cafeteria. I've talked to him about packing him a lunch, but he enjoys eating there and sitting with his coworkers. Usually when he packs he eats at his deck and continues to work, so it gives him a nice break. If we are to meet our budget goals, packing is probably the best option.

I was shocked when I saw our grocery shopping budget, to be honest. But then I remembered this was the month I started paleo again, and also the month that I spent around $100 in supplements trying to self-cure my chronic constipation (I included the supplement purchase in the grochery shopping budget). Both those things inflated our budget a lot. We try to keep it under or at $500, so basically $125 a week. We also buy all organic, and that can get very expensive.

Both my husband and I combined only spent 47.75 on gas this month. I think this is a good number. Brian has a very short commute and we really only go out once a week together, resulting in not much gas used.

Brian spent $196.99 in personal money. He bought a Roku for our living room television, as well as miscellaneous things at Walmart and alcohol.

I spent $80 on Dorothy Booth Fitness to jump-start my paleo journey, and $20 on Stitchfix. I didn't end up keeping anything from my January box. My husband also gives me $45 a week of personal money ($180 a month) to just spend on anything I want. I honestly can't remember what I bought, I think I got things for Reuben's nursery.

We spent $20.08 at the Walmart pharmacy. I can't remember who was sick, but it was either me or Brian.

So that is exactly every penny we spent from January 16th to Feb 15, around $2,500. We want to reduce it to $2,000. Do you think we can do it? What does your budget look like? Does ours blow you out of the water or does it seem reasonable? I welcome any suggestions as we attempt pare down our spending!