Why Won't My Toddler Eat?

For most of his short life, Reuben has never been a picky eater. At six months when we started solids, he would try anything! At nine months he'd eat almost anything I put in front of him, and always wanted to try what was on my plate. At thirteen months he basically ate what we did, with few exceptions.

Except for the past five weeks. These past five weeks he won't eat ANYTHING. I mean it. I've begged (only in my head, because the one thing other moms seem to agree on is "don't force your kid to eat things, because that will associate negative emotions with food" so. I don't force him. I just ask. A lot.)

It all started when he came down with a stomach bug. He threw up for four days and wouldn't even drink water. Thank God I was still breastfeeding or he would have ended up in the hospital by the end of day one.

I assumed his lack of interest in food was due to his illness, but it took him three weeks to start eating just breakfast again, when he used to eat three meals a day. I feed him the same thing for breakfast every morning because I am tired and I'm not about to cook something that early. I make him gluten free vegan toast in our toaster oven (he's allergic to milk and eggs and I am gluten free, so I wanted to be able to eat it too) and pair it with half a container of coconut yogurt. Sometimes I make bacon or sausages. I realize this isn't the most nutritious breakfast, but I'm just happy my toddler eat something, and that I have the energy to place it in front of him. On a mostly clean high chair. And on a exceptionally clean plate.

But he still won't eat lunch or dinner. He'll just play with his food. And throw it on the floor. While I hold back my temper and don't shove it down his throat.

I've tried making up games and having him feed me to help solicit good eating behavior. At the bequest of a friend, we cut out all snacks to see if he was just surviving off the jello and green smoothie I also make (mostly for myself but I also give it to him) and share with him. After one week of him still refusing to eat lunch and dinner even when I cut out the snacks, I cut them back in. Because he needs to eat something.

Last week I made pumpkin brownies and we found out that Reuben is allergic to pumpkins.

You can guess how amused I was at that. (not at all) Also, he may potentially have issues with tomatoes, but I haven't figured it out yet. If you know me in real life, I could use a food-related hug. Also, don't get offended when I can't go out to eat. My toddler's life is too important and the thought of trying to take him somewhere new is panic-inducing. I always like to skim the menu beforehand on the internet for him. And for me. Because I can't eat gluten.

Right now it's been five weeks of this refusing food fiasco and I am just done. What happened to my happy eater who would try everything and was always begging for more? I want him back. 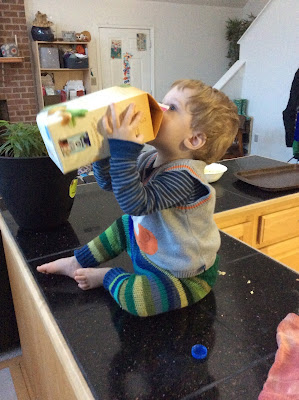 At least he'll drink the cashew milk when I'm not looking.

But oh why oh why won't he eat anything else?