A Open Letter to Gays and Christians

So, gay marriage. Hot topic, much? I've been hearing about the injustice and suppression of gay rights and the attack on traditional marriage for years, now. And you know what? I'm tired of it. That's right. Tired. Of. It.

So I decided to write a letter. There are two parts to this letter. The first is written to my gay friends, my fellow Americans who live a homosexual, transgender, bisexual, or other lifestyle. The second part is written to my sisters and brothers of the Christian faith. 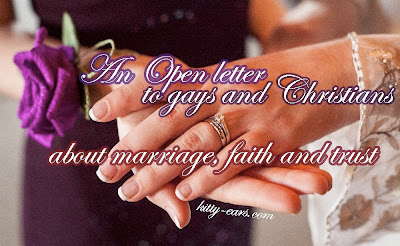 Hi. My name is Carolynn. I am a Christian and I don't hate you. In fact, I find you just as interesting and fun and amazing and unique as any other human person who lives on this blue planet. Your hopes, your dreams--I love hearing about them. Your struggles, your trials--I encourage you to persevere though them.

I have read so many articles written by gays and bisexuals calling Christians bigots and hate-mongers and all sorts of terrible names because we don't support your cause. Listen, there is something you have to understand. I am a christian by choice. I choose to live a christian lifestyle. I firmly believe that as a Christian I am called to live differently. My God, the God of the Bible, tells me not to marry someone of the same sex. Gay marriage, to my God, is an affront against him, the same way not wearing a veil would be to many Islamic women. This does not mean I am any better then you. This does not mean that by my choice to live a heterosexual lifestyle that I am saying negative things about your lifestyle choice.

Let's approach this in another way. Many women who are Islamic wear a garment called the Burqa. As a christian, I don't wear a Burqa.  (I do feel called to dress modestly, but I don't cover myself head to foot in a Burqa) Does this mean I hate women who choose to wear a Burqa? No. Does this mean women who wear a Burqa are less women that I, or that I am better then them? No. They live their life by their religion, doing what they feel in their heart is the right thing for them--their choice, and I live mine. They follow the precepts of their god.

Do I go up to a women wearing a Burqa and yell at her because I think what she is doing is wrong? No! I let her live her own life, and if she asks about mine, or about my opinion, I will tell her, tactfully, what I think about Islam and her choice, reminding her that I as an American stand for her right to live her life as she sees fit, as long as she breaks none of our laws. (I know some women are forced to wear a Burqa, but I am writing under the belief that many who don this garment do with reverence to their husbands and in alliance with their chosen religious affiliation).

Please understand, then, my friends, that when I say I am against gay marriage--I am speaking from a christian standpoint. I am speaking of marriage as a religious observance. However, there is another aspect of marriage in the world now--and that is not religious, at least not from a christian perspective. There is marriage in civil unions. There are covenants between two of-age people who are not Christian. Thus, I have no problem with gays being allowed to marry by or in non-christian methods. The USA is a free country. Everyone that has not broken a law deserves the same rights. We have a separation of Religion and State, because there are hundreds of different Americans who believe in a wide variety of different religions and because we don't force our citizens to hail one God over another.

Tragically, I've read articles about gays suing Christian pastors who refuse to marry them. When I hear of this I feel terribly sad. As a Christian, if I went to a Muslim or Jewish priest and asked them to preform my wedding ceremony, and they refused because I was not of that religion; I would not see this as a hate crime. They are a different religion then me. It might be against their religion to marry me in the way I wish to be married. I wouldn't sue them over this--I would see their refusal as their religious right, keeping with their conscience. Why do you sue my friends and family? We are only trying to live our life how we feel the Bible and our Lord calls us to live. I would never sue a gay pastor who worships Buddha because he didn't want to marry my husband and I, a heterosexual monogamous couple! Please understand that the rights you are fighting for--the right for the state to recognize your union with your partner, the right to live as you wish--that right falls to Christians too.  (source)

If you make cakes and want to sell to only same-sex couples, by all means, go ahead and do that. But, if I make cakes only for heterosexual couples, why am I suddenly called out and bashed for discrimination? This makes as much sense as a women who chooses to wear a burqa in public being suddenly sued for not wearing normal clothes or for refusing to make normal clothing for me, if she owned a burqa-sewing business. (source)

Those who live a gay lifestyle are usually the main supporters of tolerance and fair treatment--yet sometimes you guys are extremely intolerant to anyone who happens to believe different then you. Tolerance does not only go one way. I, Carolynn of Kitty-ears.com, fully support your right to live how you want and do what you want. Honestly, I don't think the government has a right to tell me who I can or cannot marry. If suddenly, I lived in a world where only same sex relationships were recognized by the government, I would still be with my husband, and we would marry in our church, in a purely religious ceremony with my pastor, surrounded by my friends and family. Then I would live the rest of my days faithfully to him regardless of the governments idea or law on marriage.

In closing, I love you all. I hope we can overcome our differences with civility and peace.

To my dear Fellow Christians,

I know. I understand. It's hard living in this world where everyone has a different idea of the traditions and values we hold so dear. Sometimes I, too, feel like everything is falling apart. Sometimes I, too, am unsure of how to approach a certain topic or speak tactfully to a coworker or friend.

There are two things we must understand. One, is that gay people are people too. They are just like us. They are struggling, hurting, working--they have goals and dreams and have walked through pain and suffering in their lives just like us. We should treat them like every other person, with respect in the workplace, and as a friend in the real word. I know, sometimes they don't treat us the same in return--but we must understand that they have suffered. How have the suffered? Well, many Christians have said some very hurtful things to them, about their lifestyle and their choices. Many of them have been turned out of their homes for following their heart. Is it any wonder why they don't love us? Is it any wonder they are skeptical and scared of opening their hearts to us?
It's not like we have it all together, is it, dear brothers and sisters. I mean, sometimes as a Christian I feel like my every fault is pointed out and picked over by those who don't share my faith, and then brandished like a flag as proof against Christianity, because of course Christians don't have faults, you know, we're perfect. If only they knew we are not perfect. And we should never pretend to be.

Two, we must be open. When asked, we should feel no shame in explaining ourselves in a kind and respectful manner. If the person living a gay lifestyle no longer want anything to do with us because we stand firmly on the belief that gay marriage, from a Christian standpoint, is wrong, so be it. Don't put the blame on them. Don't wag your finger in their face and admonish them for the fall of marriage, because you know what, Christians get divorced too. Christians are in unhappy marriages. We should look to our own plank before picking out their speck.

I know, as a Christian, marriage to me is extremely religious. However, there are those who get married who are not christian. We Christians must realize that marriage is now more then a religious ceremony. There are people who decided to live together, there are people who divorce after only a 24 hour marriage. I would say these two things don't keep with Christian teaching at all--without even adding gay marriage to it, and I would be against them just as much as gay marriage.

We as Christians need to understand that we can't make choices for people. All we can do is make our own choices and live our own lives and let those be an example to the world, and talk openly to any curious observer. It's not our job to be hypocritical judges of society--it is our job to show the love of God to the world though our life. (I know, there are a million different ways to do this. Just try to do it in a way that doesn't make you look better--that is not the goal)

In closing, my friends, don't ostracize people who are different then you. Don't cut them off from the comrades and family they've had--stand by them. Tell them you don't think they are making the right decision, but don't let that end your friendship. Tell them you love them, no matter what. And don't remind them over every phone call, every letter of the "mistake" they are making. If your mom was an atheist, and every time you called to tell her of your woes and pain, she reminded you of your "religious crutch" and made fun of your "church attendance," you wouldn't really want to call very much anymore, would you? We are called to love them, not to judge them. They are still the same person you met and became friends with. And they need you now more then ever.

Perhaps the most important thing to remember is that we, you and I, we were not put on this earth to point fingers at every sinner and call them out for their faults. You know, when you point at someone--there are three digits on your hand pointing right back at you. We are no better.

I hope as a Christian that we can stand together with kindness and humility for what we believe in--and allow no hate or bitterness into our speech against any of our fellow humans who live here with us.