Several people have been asking about how I met my husband! Its sort of scandalous...but here is our love story! 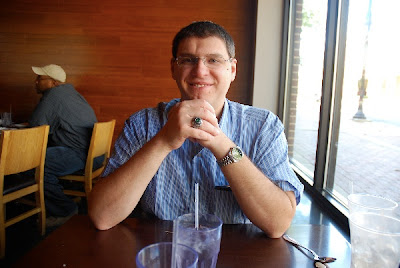 In June, I signed up for this dating website called Ok-Cupid. I was just looking to meet new people. I wasn't looking for dating (or at least that's what I told myself) I had just gotten out of a serious relationship, and I was lonely.

I messaged a few people, a few people messaged me, but I didn't meet any of them. Then I stumbled upon Brian's page. His name was CorvetteZ. He looked interesting, and I wanted to get to know him. So I sent him some silly message and he responded!

On Wednesday July 11, 2012 I met Brian for the first time. We met at a little coffee shop downtown in Lynchburg called the White Hart. We hit it off like fireworks! I remember being totally shocked over how attracted I felt to him. That weekend we went to the park, and sporadically texted back and forth. During our hike he invited himself to my church that Sunday, on the 15th.

Next week I wanted to introduce him to my best friend, so we attended her church that Sunday. She liked him, but cautioned me not to move too fast.

Here is the first picture we took together. Awkward? Yes! This was also the first day he held my hand! We went hiking on Sharp Top. 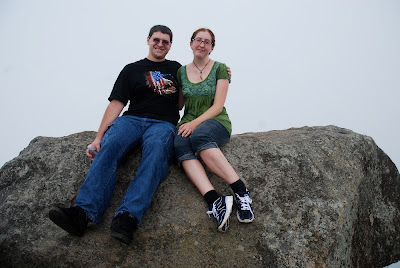 For the first month we hung out every Wednesday and every Sunday. We both tried to take it slow but I could tell he really liked me. And I really liked him!

I consider August 1 the day we started dating. On August 2, 2012 he kissed me for the first time. We were up late watching a movie at his house.. We were sitting there, the movie had ended, and I leaned in to give him a goodbye hug and he kissed me. I freaked out because I wanted to wait to kiss, but it was just a peck on the lips, nothing crazy. It was wonderful. I didn't know what to think so I left really quickly and my heart was beating all crazy! 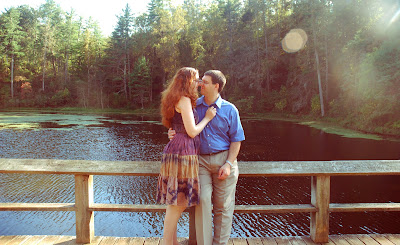 On September 1 2012 he whispered in my ear "I love you" when I was napping at his house. He thought I was asleep! But I wasn't.

Is one month too little time to fall in love? Not for us. (Although my mother was very skeptical. That's okay! She knows Brian much better now!) During this month we visited his family, went to Bush Gardens, traveled to Penn State, ate lots of dinners and visited many coffee shops. I bought him a "jar of wishes" and he bought me a dress. We exchanged kisses in the park and I mailed him letters full of poems and drawings and little cute notes. He still has all of them.

On Saturday September 22 Brian asked me to marry him. I, of course, said yes! I'll tell you about our engagement in my next post!

I would love to hear your love story!