This is part two. If you want to read part one, check it out here: How We Met.

On Friday, September 21, Brian went out and bought a ring. He didn't tell me anything about it; we had barely mentioned marriage in our budding relationship--but the next day he met me for lunch during work. I could tell he was nervous about something. We ate and talked and snuggled together and then he went home and I went back to work until 9. Of course, he invited me over that night to watch a movie--after the movie we were snuggling and I teasingly asked him to marry me in between kisses. He became very quiet. "Yes." He said, gravely. Then while I smiled he got down on one knee and pulled out a little box. At this point I was freaking out--I didn't know if he was serious or not. "Will you, Carolynn Ruth, Marry Me?" He asked. 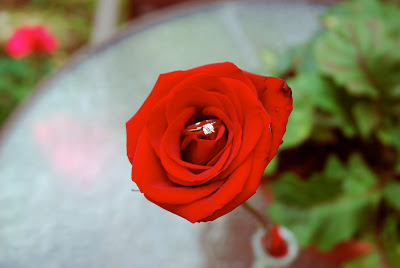 I think I responded "whaattttt??? Are you for real?"--

"Yes! Yesyesyesyes" I exploded. I jumped into his arms and he had to set me down to put the ring on the dresser because I was kissing him and hugging him like crazy. 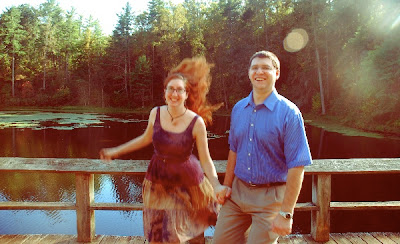 The next day he took me up on the blue ridge parkway and we took a ton of pictures with my tripod and my camera remote. I was so happy--I am still so happy. I had known for awhile that Brian was the man I wanted to marry.

On Monday I asked him when he wanted to get married. He said "soon". We thought we wanted to elope, but discarded this idea because we also wanted our friends to be part of our big day. Finally we decided on a date--November 16th 2012. We would honeymoon over thanksgiving break. 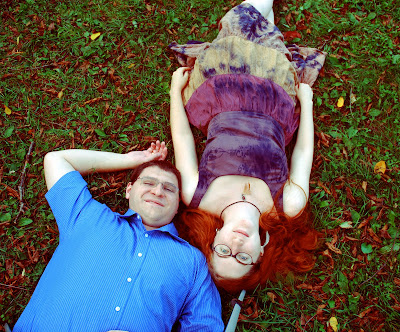 I told my mom first. She was shocked (we'd only dated a little over two months) but after getting to know Brian more she calmed down. We started premarital counseling with Brian's old pastor from college, and began to plan our wedding day.

I chose the colors purple and white to decorate our event.

We did experience some negativity in our engagement period due to the small amount of time we had dated. But we faced those who stood against us bravely. No matter what, we would not let their negativity burden us! I pray for these people, and I seek to answer their concerns with Godly wisdom and love. I one day hope they will love and accept me in return.This was VERY hard to deal with at first. But now that we are married, it seems almost comical! How can people not see how dedicated and amazing we are together?

Finally, after much searching, we found an affordable venue to be married at and sent our invitations out. The days were counting down until we would finally be man and wife!