When six months hit, I was really excited about feeding Reuben his first food. I already knew it was going to be avocado. Not only is it the food I hear most babies try first, it's my absolute favorite. (well, besides peanut butter, but that isn't a recommend first).

So I placed him in his highchair one morning and scooped about 1/4 an avocado onto his tray and let him play. We do baby lead weening, so I just let him control how much/little he ate. He mostly smeared it around his face and laughed. It was cute.


A few hours later I noticed that his face was oddly red. Looking back, I don't know why I didn't correlate this with the avocado, but it hadn't happened right away after eating it. I posted a picture of the red face on my nursing Facebook support group and was told it looked like chapped cheeks from the wind. The redness got worse when I nursed and better when "aired out", so I assumed it was coming from contact with my skin and the lotion I use on my stretch marks. I stopped using the lotion, but fed Reuben avocado one more time in his highchair. The redness remained. I was stumped. 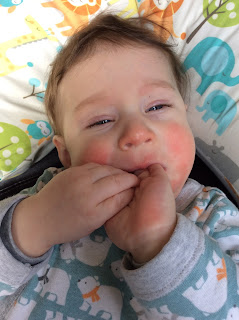 Two weeks later I fed him avocado again (for the third time) and he immediately broke out in hives.

This wasn't redness--it was a full on allergic-reaction! And it happened within about 30 seconds of me feeding him the fruit. I will be honest, I was more perplexed than panicked at this point. I posted this picture on my facebook asking what the bumps were (I didn't even realize what it was yet!) as I pulled him out of his chair and started to wipe him down. 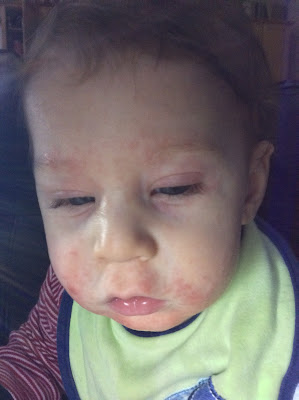 As you can imagine, I got a lot of help from my Facebook friends who immediately informed me it was hives! So I tried to see if he'd eaten any (he hadn't, only all over his face) and, like a good first time mom--promptly panicked. When I realized he hadn't eaten any I was more calm--his throat and mouth and tongue probably wouldn't swell.

It was 5ish, so I called Daddy who was already on the way home while monitoring Reuben's breathing (he was super itchy and upset but breathing fine). But mostly I was stumped. I'd fed him avocado twice before! Why now, the third time?

The next morning I called his pedi and they explained. First, they were shocked he'd had a reaction to avocado. But they explained that food allergies compound with repeated exposure-- i.e. the red face was his reaction the first and second times, but repeated exposures makes it worse. They also told me I had to stop eating avocado while nursing. I quit for three weeks, tried to reintroduce once by eating some guacamole right after breastfeeding, but it clearly still bothered Reuben even through my milk. Now am 100% avocodo free...did I mention it was my favorite food? (By the way, this is what his pedi told me to do to see if it caused a reaction, it wasn't just my "need" for avocado that prompted me trying to eat it again.)


Since the avocado debacle we've successfully "fed" (he really just plays with food at this point, I don't know if he's actually eaten much) spaghetti squash, butternut squash and broccoli to Reuben. Daddy also gave him some peas.

Yesterday I tried banana for the first time and his face got red again, so I'm adding banana to the list of his allergies. I always watch him while he's eating and monitor his face and breathing after any food. I never thought of that when contemplating motherhood! I honestly didn't expect my kid to have any food allergies.  Who knew feeding a tiny human could be so scary?

Do you have any allergies? Have you ever seen any in your kids?