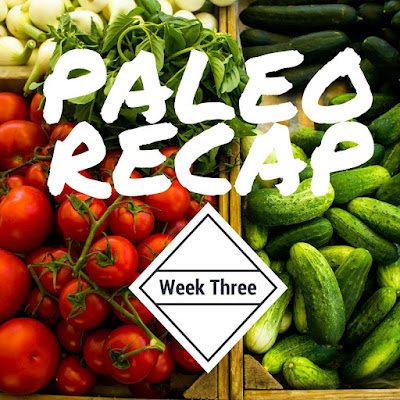 This was my first week full paleo. Well, I did still eat peanuts, but since I've given up my favorite food (avocado) since finding out Reuben is extremely allergic to it, I think it's still a win.

My eczema is totally gone! And, my scalp itches less. I have also invented a lot of food lately.


I also made eggplant cheese! Yes, that is vegan "cheese" made from an eggplant. It's actually quite easy, but it did not resemble the taste or texture of cheese at all. Maybe that's because I subbed coconut milk for the almond milk? I would say it's more akin to eggplant hummus. As long as I didn't think of it as cheese, and thought of it as a sauce, I was fine.

I am loving the paleo diet. I am about to make cheese with an eggplant. Yes, an eggplant. @minimalistbaker https://t.co/vZQbL7irVH
— Carolynn (@moonofsilver) February 25, 2016

Next week I plan to make cashew cheese. I hear that is more like the actual cheesy goodness I miss.

Another thing I tried to do this week is exercise. I exercised three times this week using Youtube videos. I'm currently using Fitness Blender to exercise. As soon as Reuben gets a bit older I plan on returning to the YMCA, but for right now it is so much easier to just work out in my home. I don't have to drive me or a baby anywhere, and I can do so in my PJs. Win.

Anyone have any good paleo recipes to suggest to me?