I'm really loving being a (unintentional) minimalist. I fell into minimalism after birthing a high maintenance child. Really the only reason I do it is that less stuff is less work. Less work means more free time to focus on the things I really love, like knitting, sewing, and spending time with my family. I have less stress thinking about cleaning, because as a minimalist less time is devoted to cleaning. It works, for me. I am not one of those minimalists who thinks my lower carbon footprint likens me to some kind of height on the sanctimony totem pole. No, I really do it from a purely survival standpoint.

My son's nursery also benefits from minimalism. Less toys to clean up, less things to distract him (he gets overwhelmed easily) and also, he plays well with what he has. He can play with blocks all day, so why clutter his tower building space with things he can't or doesn't want to play with? 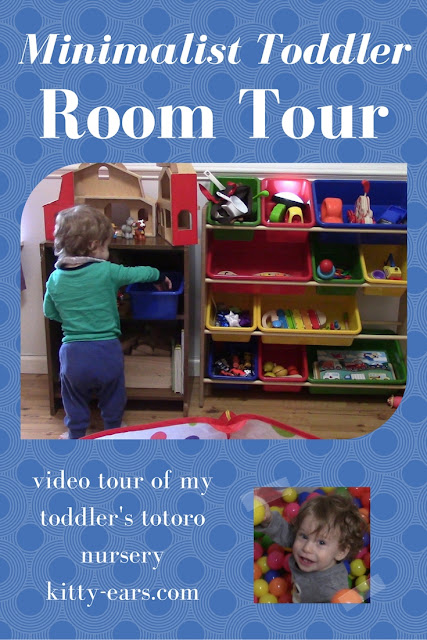 In our tiny home, it just works to maintain a minimalist mindset. Reuben's room is just under 200sq feet, so keeping it open allows him to have use of a good space for moving, wiggling and whatever else toddlers do on an hourly basis.

We picked a totoro theme for his nursery. My Neighbor Totoro is one of my favorite movies, and now it's one of Reuben's, too! (It's the first one he ever watched!) I have lots of hidden totoros in his play space, and he loves playing with them. He calls them "tow-tows". It's as adorable as you can imagine.


If you want to see what his "nursery" was like when he was born, go here. And this is a video of what we were working with around his 2 month mark; it's the same as the above blog post, but just in video format. We started out with not having a nursery--he lived in our space. Now that he is a toddler, he really needs his own space--so I am glad we set up his nursery right before his first birthday.