I'm here today to tell you about two awkward and hilarious blogging fails I've made. In these two instances my blog has flown in unannounced and turned my personal life upside down. Now, I know I shouldn't publish anything I wouldn't mind the whole world reading--but sometimes people really take things the wrong way. And nothing you can say can make them understand that you really were not saying what they think you were saying. 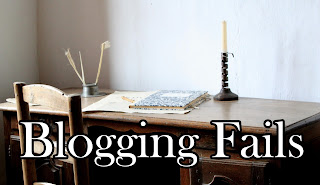 When I lived at home with my parents in the brief months between my breakup with last boyfriend and meeting my husband I was still blogging. One day I took a bunch of photos of snow in our yard for my blog. The sun was shining, everything was frosty and frozen. It was beautiful. I titled the post "Snowy Picture Dump".

And that was when the fight started. My family was convinced beyond a doubt that I was calling their yard a dump. My mom called me when I was out with some friends demanding I take down the photos, furious that I would refer to their yard with that sort of language. I, on the other hand, was completely baffled. What was she talking about?! I would never say the yard was a dump! I was referring to the major load of pictures I'd unleashed upon the internet. A dump of pictures. As in, beware, there are a lot of pictures here.

To this day she still thinks I was trying to be insulting.

Shortly after marriage, I posted a funny story on my blog where I made a your mom joke. (I bet you can see where this is going). It was awesome and I chuckled all the way through the story, knowing my readers would enjoy it as much as I. Well, unbeknown to me my mother in law had found and been reading my blog this entire time. She was immediately scandalized that I would make fun of her in this manner and one day over dinner brought it up and asked me to take it down. I believe I choked on my pie at even the mention of my blog, because I had no idea she even read it or knew of it's existence. I then attempted to explain what a your mom joke was to the utter confusion and disbelief of said mother in law. She didn't believe me.

Both these posts that I refer to have been removed from my blog, but it just goes to show you that not everyone has the same understanding of the English language. Hah!

Have you ever made a blogging fail? What happened? Please do tell!