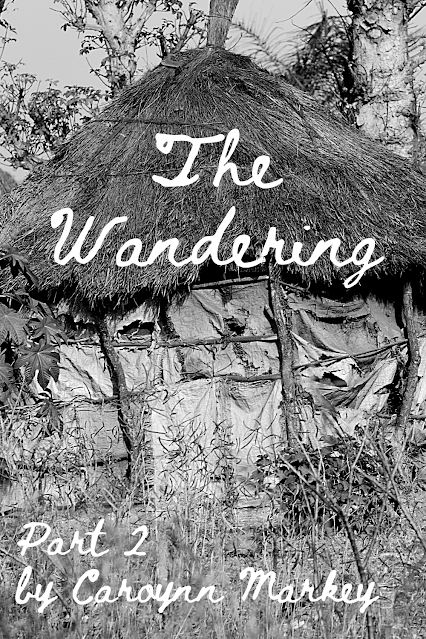 We had both known this was coming. I guess Ignose had forgotten, in the pain. My heart plummeted.

The Ogna's face twisted. I thought for a moment she was going to strike Ignose. I dropped my bundle and dashed in front of her, prostrating myself in the dirt.

“She did not mean it, Ogna. She is distraught. Please, I will take the baby to Paqia before I bathe.”

The silence stretched, and when I finally raised my face from the ground, Ogna May's winkles were set like stony crags. Her eyes were kind, though. She nodded to me, and I stood, and took the baby from her arms.

“What is her name?” I asked Ignose, who was glaring at me through a wash of tears.

“Ryia,” Ignose said, her voice wracked with pain. “Her name is Ryia.”

Paqia's hut was in the village with the spear-sisters, those who defended against the cursed clans, those who hunted and sported and fished. This, I knew, was the third time she had returned from the sea empty handed, but she had borne it well. She had always been kind to me. But Ignose, she hated. I do not know why.

As I walked, I swung my bundle quietly. The infant was asleep. She had dark skin, like the nights when the moons were all new. No eyelashes, yet. Fuzzy hair like soft moss crowned her head.
She was beautiful. I smiled, watching her chest rise and fall and feeling her warmth seep into my arm.

It was a bit cumbersome, walking with her, and my things for washing, but I managed. I wound around the path—the path from the village to the sea, where Ignose and I had made our home, and thought.

I thought, I need a plan.

Paqia's hut was empty of sisters, the grass pallets spread across the floor like discarded husks, the hollow indentations showing where each body would lay at night. It was quiet. I paused in the doorway, trying to imagine what sleeping next to so many women would be like. What living in the village must be like. A pang like a slap of seawater washed over me, but I set my face as stone. Thoughts and emotions were dangerous here, in the village where I did not belong.

But thoughts washed over me regardless of my inhibitions. I forgot Ryia, snoozing in my arms, and I forgot my bunched clothes and bathing requirements. And I allowed myself to dream. In the deepest depths of my soul I would like to be a weaver. Wielding the spear held no interest to me, but weaving! Oh, it did. I had helped Ignose weave our mats and lean-to every year since I could remember, and our clothes. Even she had said it was much better than she had done alone. I wished to stretch my skill, to have access to the soft plants those in the village cultivated instead of fumbling with my foraged cuttings.

A weaver. As I was two hands old now, I would be in my first year of apprenticeship. I eyed the warp and weft of the hut before me, and the leaves that padded the underside of the pallets. I imagined the spear-sisters reclining here, laughing together, sharing stories of their hunts and battles while they ate the choice meats and drank the fragrant bone broth from their hunts.

The baby stirred in my arms, reminding me of my purpose, and I took a step back. I had almost entered the hut.

Gulping in horror, I whipped my head around. No spear-sisters were visible.

I immediately ducked my head, backed away from the hut, and began to search the village. I should not dream thus. Especially not here.

I passed by the rest of the grass huts easily—where the weavers, the maidens, foragers, child-minders, the fishers slept. Beyond them lay the the inner circle, housing the elderly too old to work, who kept the fire-pits hot and the sauna steamy, and the Blessed, like the Ogna. Many of the women were gathered around the central fires with bowls of fish stew. It smelled delicious and made my stomach rumble, even though I had just eaten.

I didn't see Paqia's dark form or any of the spear-sisters with their short hair and breeches cut for running, so I kept walking. Beyond the fire pit lay the work huts, where the weavers wove and the women processed fish and game. I had to pause and kneel as two maidens walked by, their hair braided like mine. I heard the soft scuffing of their feet scrape as I clutched the sleeping Ryia, but they did not speak to me.

I counted two hands after they passed, and rose to stuff Ryia's fingers into her mouth. She had woken. Her eyes were dark and full, like two twin moons below her peaked brows. She latched immediately and began suckling her hand like her life depended on it. An old trick, I'd seen many of the women do.

Beyond the huts were the fields, with knee-high plants and climbing, half grown kai pushing sun-ward. I hesitated. If the spear-sisters were hunting, I would never find them. Maybe I should bathe first, and check with the Ogna again.

I turned to double back, chewing on the inside of my cheek. Plan. Plan. I still needed a plan. So lost in thought I was, as I rounded the corner of a work-hut, that I ran right into someone.
-----
Read Part 3 here.