I finished book four. I am now listening to the audio books--reading the tiny print from my thrifted finds was hurting my eyes, mostly because I have time to read at night. (Spoilers from first four books below) 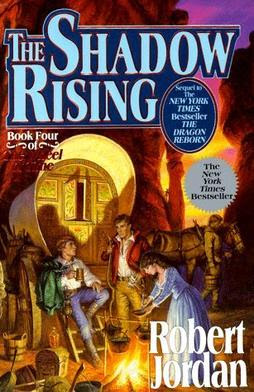 I read this about three months ago and never wrote the post, so I can't remember much about my dislikes. I really enjoyed getting to know Perrin. Faille is perfect for him. I cried when he found out his family was dead. Poor Perrin. Having chapters with Elmindreda was thoroughly entertaining!  Nynaeve is becoming one of my favorite characters. I love her! She is strong, and a spitfire. If I had to pick a character to be, I would pick her, although I am probably most "like" Egwene.

The white-cloaks are insufferable. I will never forgive them for watching and Emonds Field was attacked.

I hope Perrin and Faille have lots of babies. I hope Elaida curses the day she overthrew the white tower. I have a suspicion that Siuane and Leane will regain their powers somehow.

On to book five. Perrin is the first one to face an army all on his own here, the first time he "leads" instead of just following others. I feel like the three men (Perrin, Mat, Rand) are gaining more control of their futures instead of being dragged along by Moiraine.