The Fires of Heaven

(Spoilers for the first 5 Wheel of time books below)

Mat and Rand face their first battle in this book, just like Perrin did in the Two Rivers in The Shadow Rising. I know they have been in battles before, but this is the first one where they are not doing others biddings but instead giving orders and carrying a lot of the weight. 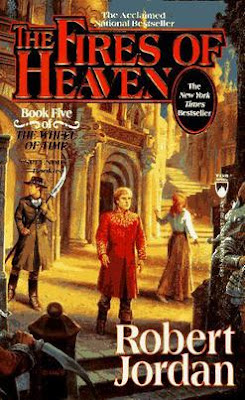 This is also the first book that has a sex scene in it, between Rand and Aviendha. I didn't see that one coming at the beginning of the book but now I see the attraction. Why Rand gets three women all tangled up in a love triangle is beyond me. He is denser then a stone when it comes to romance and it must be the pull of Ta'veren that ensnares them, because Aviendha seems to resent Rand most of the time and Elayne is a princess, not some peasant to be attracted to Rand's shy farmer's persona. She would have been raised to appreciate a refined man, I think.

The only one that really makes sense is Min. She's perfect for him, gentle, and not pushy. I think of all three she alone really understands him. At least that is the way I see it-- Rand is a clueless idiot for most of the first four books and each woman (well, except Min) has pursued him, not the other way around. I can't see how this is going to turn out, but I bet Elayne is not going to be happy if Aviendha makes Rand her warder, not to mention that she slept with him. I laugh every time she tells Nynaeve that she isn't worried because Aviendha is watching Rand. Hah, hah.

Mat also has some lady troubles. Mat is peculiar to me, mostly because I have never met a man like him-- a man who does what is right but complains so much. He's like a whiny baby the way he moans about duty and dice and woman yet he gets what he wants most of the time.

Nynaeve being broken by the Forsaken was also very interesting. I didn't think she could be broken, but I know she will heal. She is strong, and she will beat Moghedien. Birgittte reminds me of Min, but like...if Min hung out in taverns and liked to fight, instead of just a tomboy. I hope she finds her other half.

Who killed Asmodean at the end?? I really liked him. I liked seeing more men that could channel, as all you really see are women, and not much is known about the men.

Moiraine will turn up again, I think. We didn't see her killed and I feel her story isn't over. Poor Lan, he will blame himself.

The biggest thing I took away from the book was Rand's change. He is really growing up and becoming jaded.... I feel for him. He is in pain and he needs help. He is shouldering the burden of saving the world and ready to lay down his life all by himself. I can feel his loneliness. He is isolated from friends and family because he is the dragon reborn. People want to control him and manipulate him. He has to look out everywhere for danger and worries about the people he loves. He also is undrer attack mentally due to the taint and Lewis Therin. Poor Rand!

Well, on to the next book.