I spent the first few years of motherhood complaining. It's true, just read my blog posts. While it was hard, and life is still hard in many ways, I am coming to learn that trials of all kinds are the way God refines me by fire.

Today I read this during my devotion time:

"In the days of his flesh, Jesus offered up prayers and supplications with loud cries and tears to him who was able to save him from death and he was heard because of his reverence. Although he was a son, he learned obedience through what he suffered."  Hebrews 4:7-8


I was struck by that. Jesus learned obedience by what he suffered. He didn't complain, moan, or whine. He offered up prayers and supplications with loud cries and tears to God--he didn't rag to his disciples about what trials his father was putting him through, unjustly. And of all the people he is the only one who could have claimed that it was unjust--because it was. He died for our sins.

Suddenly I viewed my complaint filled Facebook post on my moms group about how late my husband works, how my toddler doesn't sleep and the whines I deal with in my son (he's four) in a whole other light. A cheap and sinful light. The text I sent my friend about how "awful my day was" and how "tired I am". All my whines and mom-angst, all piled up before my eyes.

And there is a lot of it. I am...good at complaining and feeling sorry for myself. 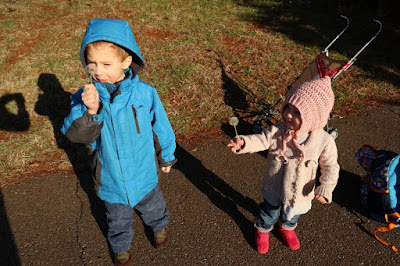 Life is hard. But instead of running to Jesus and offering up my prayers, I have consistently complained, whined, and thrown God's blessings into the mud. Life as a mom of two isn't a cakewalk--but Jesus was called to die on a cross after being beat to death, and he didn't treat his calling the way I treat mine, which right now just involves child-rearing, husband-serving, and cloth diapering.

I mean, I don't know what the future holds for me. Will I be called upon to die of cancer? Taken in a car wreck? Heart attack? I would aim for peacefully in my sleep, but I don't get to choose how I meet my savior. But now I know I want to follow whatever God has in store for me with obedience, the obedience he shows to his own heavenly father.

And, In comparison to "murderous death on a cross," motherhood doesn't sound so rough. I mean, in today's day and age I don't even have to fish for my dinner and cook it over a fire pit like the disciples would have. I have hot water that comes out of a tap, and I don't have to weave my husband a garment or sew him underwear. I get to buy that stuff at a store.

What I am trying to say is I have been convicted. I want to stop complaining. I want to learn a biblical way to deal with trials. Even when Job complained to God, God told him he had no right--and Job ended up apologizing.

We are his vessels to shape, his creations. I can rise above my circumstances and see the Joy God has for me. I can learn obedience through my trials, too.