Children Are Not Sexual

I was eleven, and I had a lollypop. We were at the post office, and I was with my mom and my sister. I remember it was cherry flavored, given to me by the nice bank teller lady, and I was happy my mom let me eat it right then, because usually I had to wait until after dinner.

As we were leaving I was skipping and holding my sister's hand, enjoying my treat.

A man looked at me. He pantomimed me eating the lollypop. He said he wished he was my lolly pop. He winked at me. His eyes followed me as I looked at him from my shy, eleven year old space.

At the time I didn't understand that the man was verbally assaulting me. I thought he was being nice. I smiled at him. My mom grabbed my hand and rushed us out of the store. She was upset. I thought I had done something wrong. I was confused. My mom told me I'd done nothing wrong but that the man was gross and lewd. I didn't understand until college what he had meant.

This is me around eleven. 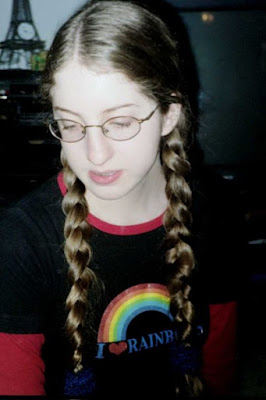 Later, I was thirteen. Newly a teenager. Newly budding body (although not as budding as I wanted). I understood nothing but was excited about everything.

We were in Walmart. I was once again with my mom. A man followed us pantomiming oral sex and winking at me.He called me "hey girl". And asked me how old I was. I didn't respond. I didn't know what to do but I remember turning really red. I told my mom, who was in the same area as me but looking at the bananas instead of the tomatoes. My mom stared at him. He waited until she wasn't looking and did it again, but this time my mom did see him. She yelled at him. He followed us for a little while but gave up as my mom yelled at him again to leave me alone.

My mom told me he was gross and that it wasn't my fault. But I remember feeling both pleased that he had payed attention to me and also disgusted like he'd undressed me without my permission or something. I'd never received this type of attention before--but it wasn't a positive attention. It was a wrong, perverted type of attention--verbal sexual assault.

In case you were wondering, this is me around thirteen. I wasn't even allowed to wear makeup at this time. 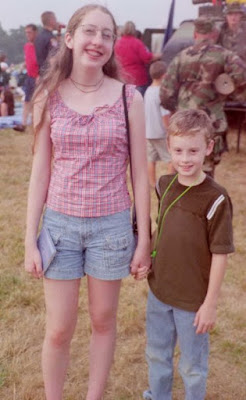 Children are not sexual. As a child, no man or woman should have looked at me and thought sexual thoughts. I should not have been catcalled as a child. (I shouldn't be catcalled at an adult, but that is a whole different post) There is something really wrong with our society when children are seen as sexual beings.

I don't write this for any particular purpose, just to tell my story. Protect your children. My mom tried her best to protect me. I will protect my girls and my boys as well from the preying eyes of adults. Children have a hard enough time discerning between positive and negative attention without being sexualized and verbally assaulted. Both the men who verbally assaulted me as a child were well into their 30s.

And I will never forget it. Even as an adult.