Woah! Four months! Who would have thought? I feel at ease with the paleo diet finally. I'm also learning some things: like I need lots of spices to make things taste good. And also spices are amazing. What did I do before? I think I just added cheese to everything.

The number one spice I seem to use is cumin. I loveeeeeee it. I put it on raw cauliflower before roasting (just like french fries) and I've put it in nut cheese and also curry and many other dishes. It's delish. 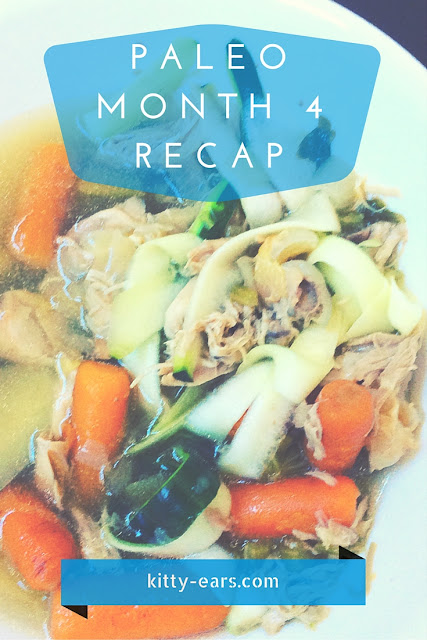 , and AAG: Meals Made Simple

. I've cooked several meals from these two books so far (about 2-3 a week) and all I can say is YUM! AAG has an amazing bread recipe that even the husband loved--AND a cheesy dish that husband did not know included no cheese (cashew cheese). I'm sold. Definitely worth the money if you are going paleo and don't want to figure out how to feed yourself delicious food on your own. I'm going to try her cake recipe next.

I made @meljoulwan chicken Nanking #paleo #paleolunch #wellfed #wellfed2
A photo posted by Carolynn M (@moonofsilver) on May 21, 2016 at 10:04am PDT


Yum. I'm excited about food again, what can I say.

I also gave up corn this month. Before I was allowing myself both organic corn and peanut butter, but now I am just eating peanut butter when I feel like it. I don't think it bothers me, so it's okay. Giving up corn was a choice mainly of finances as we are still trying to get out food budget under control. Our hope is to not spend more than $2,000 USD a month--and right now half of that is going to food! That will change, this week I actually only spent $100 on food and (gasp) made my own ketchup, mayo and other sauces to help save money. Most of the inflation we've seen to our food budget has come from paleo sauces--and thus making these myself (even if it's more time consuming) is worth it to save money! We've also been going to the farmers market, and this has helped save money too. The produce isn't technically organic, but buying local and visiting the farms and eating in season has it's perks too!

Last but not least, I weighed myself and did a happy dance, as I am down to 165 (10 pounds from my pre-pregnancy weight of 155 and 15 from my goal of 150). I know weight can be a hard thing to talk about tactfully, and I struggle with it still. But I am having more good days than bad days and trying to look at overall health instead of numbers on the scale.

Here is to the next month of paleo delights! If you want to see what I eat daily, check out my daily vlogging channel, I show my food (and prep) most days.