Can Breastfeeding be Immodest?

I usually reply "I feel completely decent when breastfeeding in _______, (church/store/restaurant/park) why don't you?" This is when the conversation stops and I get some weird comments about modesty and breasts and nipples, and "but my husband could see another woman's breasts if she does so uncovered!".

Most of the statements above I've heard uttered by college students and young married couples with no children. Now in a real world they should have seen women all over the place breastfeeding their kids in public. But they haven't. Think about that. Before I gave birth I'd never seen a women breastfeeding in public either!

So for one, we are dealing with a whole society of women who don't know what breastfeeding in public looks like. The majority of them feel anxiety when thinking about it. They have only been shown that breasts are sexual objects, so they associate their own breasts and the breasts of others as sexual objects. They are afraid of their husbands and fathers seeing other women breastfeed in public, and view those who nurse in public as either flaunting or indecently exposing themselves to men. Some have even expressed nervously that their own husbands will have lustful thoughts if they happen to catch a glimpse of a woman feeding her infant or child in public. 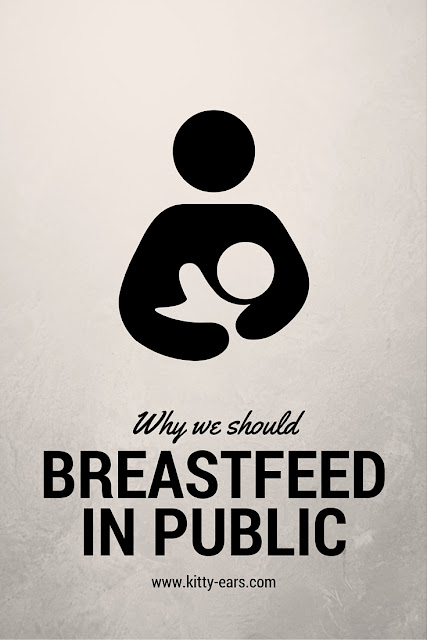 I've seen women nervously trying to breastfeed a fussy baby under a cover, their eyes darting around to make sure no one is watching and their hands holding the edges down over a kicking, bucking, unhappy baby.

Some of us are told by our husbands that we can't breastfeed in public. I was. It took a long conversation about breasts, bodies and hungry babies to help my husband understand. He too was raised in a world where breasts are only sexual objects. Now I am happy to say he is 100% fine with me feeding Reuben wherever. He's even been around other women breastfeeding and you know what-- most of the time he does not even notice. It's become normal to him. As it should be to all of us.

I think that's the first issue. We don't see it anymore, so it's not normal. It's abnormal. And who wants to be or do something against perceived social and moral grain? 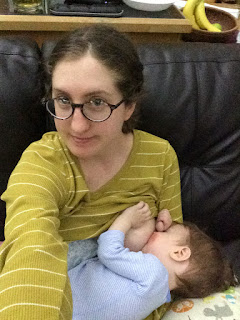 I think the next issue is in regards to modesty. There are a lot of misconceptions about modesty, like it being a specific style of dress or inches of fabric. Modesty is not pointing fingers at others. Modesty is not wearing a long skirt or making sure all of your back is covered. Modesty in Christianity is done for the glory of God, not others and not for yourself. I think that is what a lot of people get wrong about modesty--it's not about me and what I think is decent or about others and trying to adhere to what they think. It's about God, and what he says. God made my body and I don't think he ever wants me to feel ashamed of it. He made my breasts to make milk for my baby and I don't think I should be ashamed of that either. He made me Reuben's mother and it would be abusive to ignore my child when he is hungry just for the sake of what others think about "modesty" or "decency".

And you know, the women I see on facebook who post about how gross breastfeeding in public is and how immodest--those same women have pictures of themselves wearing bikinis. And I've never seen those same women make posts against lingerie stores or highly sexualized ads. They still drink their Starbucks from Barns and Nobles, too (you know, the company who sells Maxim and the Kama Sutra right on their bookshelves.) You'd think these same women would be advocating for every girl with a sweetheart neckline to wear a bib or something--or at least for a paper bag to be draped over said sexy magazines at the store. Nope. It's only breastfeeding that offends them for some reason. Probably has to do with the fact that we've all been taught boobs are only for sexual purposes and seeing them used for something else is what causes the discomfort.

Also, lets not discount the many paintings of mother Mary openly breastfeeding baby Jesus. There are so many, and they are so beautiful, and are mostly on display in orthodox churches (whom are usually considered very conservative churches). If mother Mary can do it in plain site of people worshiping God, why can't I?

In short, breastfeeding is about feeding babies. It is not immodest or indecent and should be performed in a fashion that both mother and baby feel comfortable with, wheresoever they feel comfortable doing so. Breasts can be used sexually, but they are by themselves not sexual objects. They can also be used in art, and in feeding babies, and other non sexual things.

Now, don't get me wrong. I have absolutely no issue with a mom who wants to use a cover or desires to be more modest in her daily life. But I do have an issue with shame. And with legalism. And I also think breastfeeding needs to be more of a part of our daily lives, done openly and for one reason: that of feeding babies.

In another post, I gave my reasoning as to why personally I breastfeed in public. What do you think?