Growing up I never really thought about if I was or wasn't a feminist. Of course I wasn't. Feminists were all lesbians, and man haters. Why would I ever want to be one of those?

When I graduated college at 21 and entered the real world, I met a few actual feminists and realized they weren't horrible terrible people like I'd been told. They were reasonable, nice women and men! What a shock.

I was raised in a baptist church, but I didn't accept Christ until I was 26. I spent the first 21 years of my life believing what adults and church leaders told me about the bible and about feminism. At 26, when God finally came knocking and I surrendered my life to him (because it's His anyway) I suddenly found myself confused and lost more than before I became a Christian. (Because figuring things out for yourself and not being a sheep is hard!)

I decided I needed to throw out everything and start from scratch. Everything I'd been taught about church and God and the bible and the world needed to go. I'd only believed it anyway because an adult had told me in Sunday school! So, four years ago I began the painstaking process of building myself a world view on God based on what He said not by what others told me He had said. It's been a tear stained and hard journey, I won't lie--and it's still progressing.

In the four years since I've accepted Christ, I have learned so much through. So much good has come into my heart through throwing out the lies and the misinformation and gaining background into what being a Christian really means. I have started studying hermeneutics and theology, and I've questioned almost everything I thought I believed. I've grown in my knowledge of God and for sure I have changed! Obviously at four years I am nowhere near done searching, of course.

But feminism. The dichotomy of my past and the uncertainty of my future made me question feminism again. Can you be Christian and a feminist? What does feminism stand for? 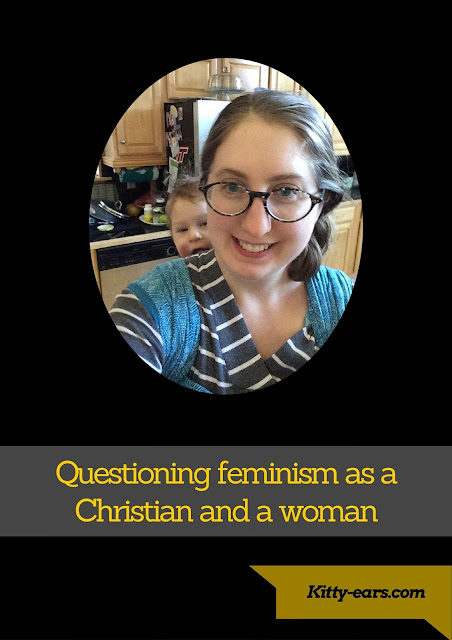 Before I could think about what feminism stood for I had to find out what I stand for. For one, I am a conservative Christian mom who stays at home, who wants to home-school. I think saying home when your kids are young is what is best for raising children, although I know not everyone can do that. I believe abortion is wrong. I think sex should be saved for marriage but I also believe in sexual education. I think homosexuality and being transgender does not align with God's plan. (This does not mean I think someone cannot be born gay, or transgender, because I do believe that you can, most certainly be born that way. I just believe that if you choose to live a gay or trans lifestyle or even live with your boyfriend before marriage you should not label yourself a Christian. If you have an issue with my religious belief I would point out that many religions have tenets that followers must adhere to, like Jainism that says it's followers must be vegan). In my mind Christians, although imperfect and fallen and wrong, should believe what the bible says and try to live a life that follows Gods commandments. Even when we fail.

So that is basically what I believe. It may not seem like much, but to me knowing finally what I believe is a relief. As to if I can still be a feminist, I don't know. I am still learning what it is to be a Christian, and I feel that comes first right now. What do you think? Are you a feminist? Why or why not?