I'm a fairly new christian who was raised in a very fundamentalist Christan church. The concept of gender roles in regards to myself is a subject I've just began to grasp on a 101 level.

Last year I wrote a blog post about the things I learned in my first year of marriage. It wasn't rocket science, I mean--I'd only been married for one year. However, in the comments one of my friends said my list made her laugh because of the stereotypical gender roles/expectations included in my post. And yes, I have been stewing over that comment for over a year. It made me think. In a good and bad ways.

Today I set down to begin brainstorming for my second year post. I want to do one every year, so in 50 years I can go back see how my marriage has (hopefully) grown. My second year of marriage is coming to a close soon. And rereading my old post got me thinking about gender roles. 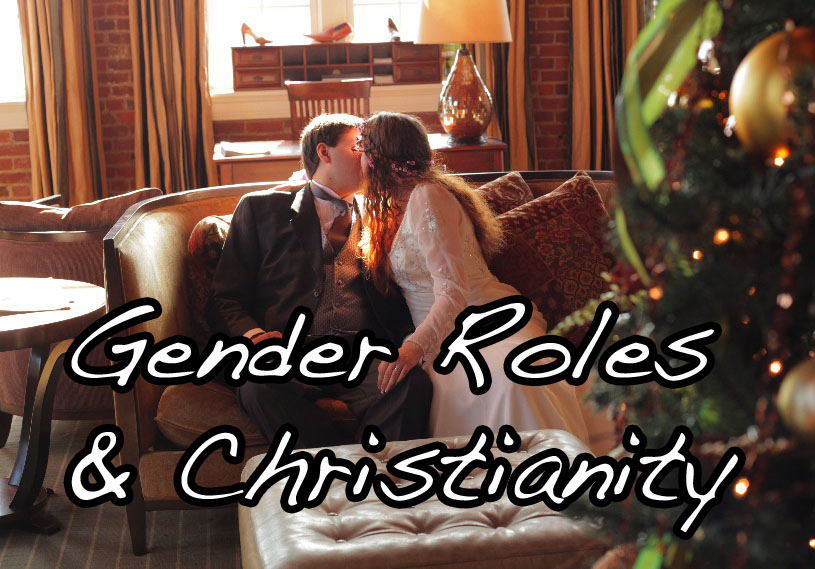 I first thought about her comment. Does my marriage fall under the umbrella of stereotypical gender roles? Sometimes. Do my husband and I run our marriage because we believe these rules are rigid and we must conform? Not at all. We operate our marriage because it works for us. From the beginning my husband and I have been really open with what we both want. We are both very happy with how our marriage is working "behind the scenes" in terms of finances and chores. I am lucky to marry a man who has, more or less, the same idea of what I should be doing in our marriage that I do.

That brings me to my next thought. Is having a stereotypical marriage a bad thing? Not for me. Not for my husband. But I think the idea is more because we choose these things and less about social norms or fundamentalist pressures. And the things I learned in marriage were simply that-- things I learned. They were not meant to preach to anyone else, they are just simply a list of revelations I had about marriage after one year. Maybe they spoke to you, maybe they didn't.

But wait, I'm not done. This further got me thinking about gender roles in a broad sense. You see, I did grow up being told "men are this way" and "women are this way". And this kind of thinking has caused some problems in my marriage.

I've learned that I didn't marry a man. I married Brian. Brian is male, but he is not his maleness. I realized that when I treat Brian like my idea of what a male thinks/ does, we have problems. Instead of looking at my husband as a person, sometimes I look at him though my "male-perception" glasses.

Let me explain. Think of every stereotype you've heard about a male: that they have a higher sex drive, that they like sports, that they stare at women, that they struggle with lust, that they hate "girl" talk, that they like bacon and rugged things (just to name a few). These things are preached from many pulpits as truth and as marriage "medicine": if you only gave him more sex, if only his secretary wasn't wearing that short skirt, if only you could cook, if only you didn't talk so much...

When I start to treat my husband like a "man" is when we have trouble. For example, one time I made a date with a friend to see what I considered a "girl" movie, only to find out that my husband was a little peeved because he had actually wanted to see that movie with me. For a deeper example, I am always fearful my husband is starting at other women. Much to the point of where I often question him about where his gaze is wandering when there happens to be a particularly attractive young lady in our vicinity. It took me awhile to realize that it was wrong to question my husband in this manner--(he is quick to notice cars, but not females he tells me) but it took me even longer to realize I was treating my husband as if he would be a very specific type of person because he was a man.

And that is what I mean about gender roles. I married Brian as Carolynn. We are a man and a women, yes, but our wants-needs-desires are our own. It would be to simple to compartmentalize us and view only a male and a female. I need to learn what Brian wants, not simply give him what I think (or was told) a man needs.

And I suppose that is also the biggest thing I've learned this year about marriage.