I would describe Eye of the World, the first book in the wheel of time series, as a gentle river. The story grows like the tide, inch by inch covering your feet to your ankles to your waist while you serenely read. In comparison The Great Hunt is a steam engine on full throttle chugging down the tracks. It's a tsunami of a tale that is calm one second and thrashing about in tumultuous madness the next. I found myself always on the edge of my toes, wishing I could read faster--trying to read faster.

I just finished the second book yesterday. And, wow, it was good. I am glad I stuck with it.

If you want to read my review and mind canon for TGH, keep reading. Spoilers for Eye of the World and The Great Hunt will abound. 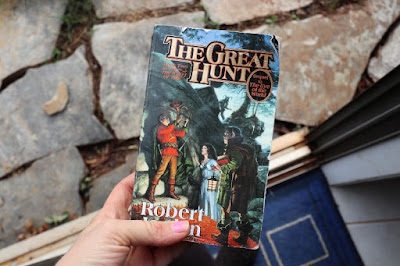 So the first half of The Great Hunt takes the male heroes (Rand, Mat, Perrin, Loial) and company (Verin) off to find the horn. They lose it again, of course--in a town that would make the subterfuge of Kings Landing appear tame, I think.

The ladies go to Tar Valon.

There is a new minor character introduced--Hurin. I really liked him. He fits nicely into the story, a man who can "smell" when violence has been done--and can follow the taint of murder with his nose.

The second half of the book sees the men still chasing the horn, while Egwene is sold as a slave (damane they are called) and Min and Nynaeve and Elayne (minor character from book one, the Daughter-Heir that Rand runs into) work to free her. I was frustrated with this part of the story because it was heartbreaking. And everything is happening so fast and furiously!

In the end Rand is proclaimed as the Dragon Reborn and fights the Dark One. Mat reclaims his dagger. The girls free Egwene.

That is a short summery of what happened. Now for my thoughts.

I feel like the characters personal growth development (that was so awesome in book one) was completely disregarded because the plot was progressing so rapidly. Book one ends with Rand who doesn't like Aes Sedai and doesn't want to be part of the pattern. He refuses to acknowledge his destiny. And now, at the end of book two, we have Rand who doesn't like Aes Sedai and doesn't want to be a part of the pattern and still is fighting to acknowledge his own destiny. I mean, throughout The Great Hunt we have to listen to him whine about being called Lord this and Lord that and hear him constantly repudiating anyone who thus names him. He has the biggest case of imposture syndrome I have ever seen. He also still cannot talk to women (Selene) still bumbles around like a farmhand, and is still hopelessly pigheaded. Besides finally realizing that he is the Dragon Reborn (and also hating it) he hasn't grown or matured much at all. What has he done with himself for 681 pages? He has progressed a bit in sword work and he's learned about channeling by messing around and surviving completely by the seat of his pants.

I guess what I am saying is that I, as a reader, don't feel I learned anything more about the characters in book two. I did, however, learn a lot more about the plot and inner-workings of the Wheel of Time world. And the plot has become very complex. The dark one, the Machin Shin... the Light, the Whitecoats... so many chess pieces. How did one man have all this in his head? I am blown away by the complexity. It's an amazing read, even if the personal development feels limited. 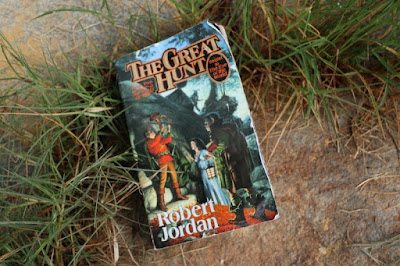 The darkness--the vile evil--is a lot more potent and descriptive in book two. Many times I found myself disgusted and appalled at the things the Trollocs and Fain did and left for the Hunters to find. I was definitely a lot more uncomfortable reading book two than I ever was with the first one. Jordon absolutely explores the depths of corruption and doesn't hold back.

I am very pleased that Jordan does not include descriptive sex scenes in his books so far. There is love, and mentions of sex--but nothing pornographic. I hope this trend continues for all of the novels.

I really enjoyed The Great Hunt in blind-blowing proportions. On to the next book next month!