Eye of the World Reread

I've always wanted to finish Robert Jordan's epic fantasy series. I have read books 1-3 in college but quit after that. The series has been on my to read list forever. So I decided to tackle it now, of course, amid diapers and cooking and homeschooling. Why? I don't know. (Also this blog post contains spoilers from the first book so reader beware if you, too, have this on your TBR list) 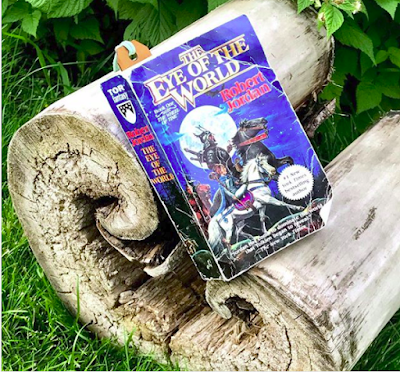 Today I finished The Eye of the World; the first book in the Wheel of Time series. I remembered several things wrong. For some reason I thought Moiraine told the three boys that one of them was the Dragon Reborn and that the book was about finding out who exactly was the Dragon Reborn. She never mentions it to them, and honestly I don't even know if she suspected it until near the end. It's been 15 or so years since I read it, but I still surprised that I was that much off the mark.

I love the slow start to the book. It really drives home how rustic Mat, Rand and Perrin are. It's a slow start, yes--but the reader gets a very good grasp of the foundations of the charters, their homes, and their personalities.

The only thing I didn't like is the age-old woman vs. man struggles. The bickering between the sexes, the misinformation and the judging of women on men and men on women. I mean, it is probably realistic but the squabbling and juvenile barbs just frustrated me. I wanted the characters, at least, to be able to communicate among themselves. It was a tad overdone.

Because (rant) can't SOMEWHERE, men and women get along and govern together without bickering?! The Woman's Circle fights with the Village Council. The Aes Sedai fought with the men Aes Sedai 3,000 years ago. It just seems like somewhere, in some world---women and men can actually talk to each other with comprehension. Somewhere? I have hope. Moiraine and Lan seem to get along in their mostly work-related relationship, but everyone else is a bumble-foot when it comes to the opposite sex.

I don't remember anything about the next two books although I know I read at least the second one. I do have some speculations. I think that Rand marries Min (the seer that Moiraine knows that "looks like a boy") I am basing this off how she stared at him and just a general feel of their one conversation. Signs were there. I don't know if I am right. I do hope that Nynaeve and Lan get a happy ending. Does he remind anyone else of Aragorn from LOTR? I also hope Nynaeve looses her fear and disdain of Aes Sedai.

I really like Rand and Perrin. Matt annoys me, but lazy characters that play tricks on people are not my favorite type. Moiraine was also a source of ire because she never spoke plainly. I also did not like Nynaeve, she was bossy--I know she probably had to be, as a young woman in a high ranking position, but it exasperated me. She's one of those people who always thinks they are right and has a hard time seeing life from other perspectives, though she does grow as the book progresses. I probably find her hard to read because I personally was like her?

After Rand and Perrin, the gleeman is probably my next favorite character. The gleeman is hiding something, for sure. I liked him, but I could tell there was more to his character then met the eye.

If I was in the book, I'd wish to be a Tinker and dance the evening away. Their life when Perrin visited for a short while struck me as just the thing for me. I hope they find their song.

Finding out Rand was the Dragon Reborn at the end was perfect. I knew it all along because I remembered it, but still.

I can't wait to read the second one! My goal is two books a month, so that puts me through the whole series by January 2020.

Have you read these?

(picture by The Wheel Weaves Podcast and used with permission) I'm going to give their podcast a listen for sure.