Your Opinion Does Not Matter

We live in a day and age where the majority of us (in the United States, at least) have been raised to believe we are special snowflakes. College taught us we are unique--"only one of us in the whole world". We've been conditioned to think we'd grow up and be fallen in love with, and be given a job just because we "have a degree". We grew up listening to music that catered to this kind of thinking, music that celebrated our inner beings, reinforcing the fact that we are special and unique.

We are not special and unique.

Hear me out. We now live in an internet age where kids and adults tell other humans to kill themselves over a YouTube video. Don't believe me? Just read YouTube comments.

We live in such a judgmental age. Many times when I see friends and family post things on Facebook, I just wait for the snap judgements roll in. People aren't even nice! I made a post about delaying vaccines for my child when he was born and was called a child abuser. A child abuser. Instead of sending me some factual evidence for me to read and consider, I was named called and attacked for simply stating I wanted to wait to start vaccines until my son's two month appointment and delay the one they give at the time of birth. I was a new mother. I was vulnerable and confused. And suddenly I was being compared to people who beat, molest or endanger their children.

After several more of this sort of comments from friends (and strangers) alike over my choice to home school, I have come to the conclusion that we as a society place to much weight on our own opinions and are no longer giving people the space to form their own, much less breathe. 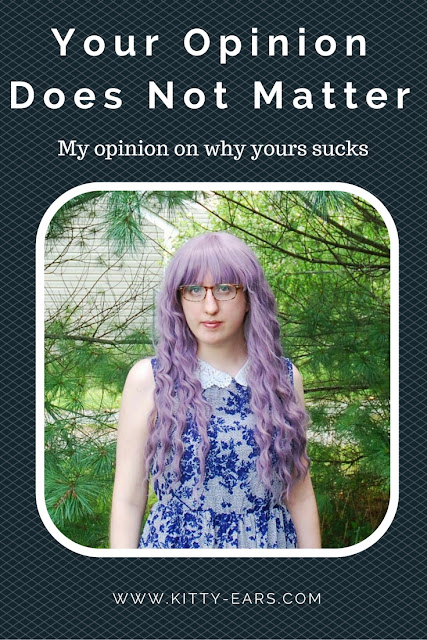 I myself have done this same thing. One time a friend of mine responded to a meme I placed on twitter about the cry it out method. I am not for the cry it out method for my own child, and I honestly don't think anyone should do it. It feels wrong to me. But you see, instead of treating this other parent with respect I steamrolled her with information on how she was damaging her child by using the cry it out method. I thought if she just understood or read these articles she would change her horrid ways and be a good mom like me! I was wrong. I really do believe sleeping through the night is a developmental thing, and that babies should not be left to cry alone. But I shouldn't shame other moms for choosing this for their own children. I myself have been shamed and ridiculed several times for decisions I have made for Reuben. It's not fun. (And can't we just all agree to drop the "good" and "bad" from the word "Mom" and just BE MOMS?!)

That brings me back to opinions. We all have them. We all proclaim them on the internet. And in a world where most have access to this hub of information, our opinions overlap and jostle each other, their gleaming edges sharpened to razors for maximum effect. We want to show people how right we are and how wrong they are. We want to be on top.

So where is the line? Certainly sharing isn't wrong. I am all for transparency and for people to share what they feel comfortable with online. But alas, even that can fall into error as many think publishing personal details on the internet is wrong and harmful. So where does the line of opinion fall? I would say we would all agree that telling someone to "kill themselves" or wishing an anti-vaxer's kid "catches polio and dies" are statements that are definitely on the "wrong" side of the track. Yet they still happen. All the time.

I'm here to propose a different sort of answer to the problem. Your opinion doesn't matter. My opinion doesn't matter. None of our opinions that we hold so dear in our special little snowflake hearts matter. And also, humiliating and shaming someone is never the right way to address a safety concern (i.e. every comment on a picture you post of your kid in his car seat). Loving and supporting our friends and family is what should matter! Not winning a facebook or internet argument!

And yes, I realize the complete and utter irony of writing my opinion about how opinions don't matter. Feel free to leave a comment detailing the manner in which I should die below. I'll laugh, and you'll feel like you've put me in my place--so it's a win-win, right? Wrong.

Let's all keep our opinions where they belong--in our own personal bubbles. It's not our job to go around attempting to pop everyone else's carefully considered choices. Maybe we should all try some tact.