It's My Fault: My One Parenting Mistake

So last month Reuben started climbing up the couch to our kitchen island. This kitchen island was a previously baby-proof sanctuary for phones, iPads, hot adult beverage and other miscellaneous parent-only items. Because, you know--he used to not be able to access this area.

Let me tell you, when your parenting safe space is being invaded by tiny little human whose one and only goal seems to be to drive you insane and make you move (and lose) every important item in your house--it takes parenting to a whole other level. I kept forgetting not to put items on the island, making it much harder for my little human to resit couch-scaling.

In short, for three days it felt like my life was over.

Add in some teething, general toddler grumpiness, husband's overtime and a sleep deprived mama (because teething) and it's a recipe for disaster!

For three days I repeatedly pulled Reuben off the couch mid-heist and reprimanded him only to have him laugh in my face and try to climb again. We bought him a slide so that he'd have a safe item to climb on. He hates it. And I was at my whits end trying to figure out what to do: should we try to move our couch? (it's huge and L-shaped) or should we just let him climb and fall? (no no no)? I was exhausted from managing him and he didn't seem to understand the world "no" yet.

And then one day I just decided to keep him in his bedroom with me and play there.

It was the most peaceful day ever. He didn't climb on the couch because he wasn't in the same room as the couch. I didn't have to tell him no. We read books and played quietly together. He didn't have a meltdown because I had to take away my keys or other item: they were safely in the living room.

That's when I finally realized the one parenting mistake I'd been making from the beginning. You see, I've always approached parenting as needing to make my son obey/do something. This is all wrong, at least while he is a child. He can't understand things! He doesn't know! And he has all the emotions but none of the control. How can I expect him to control himself, a mere toddler of 13 months? All those days I spent catching him doing the "wrong thing" of climbing the couch and removing him and chastising him...when I could have just removed myself and him to a different room so he wouldn't be tempted by what he didn't see. 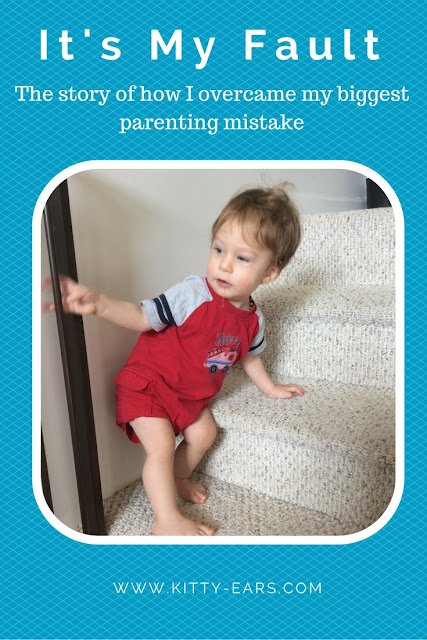 I can't control my child. But I do have control over myself. This is when I realized most of Reuben's tantrums and "problems" can be avoided by making changes to my own life, not his! Do I want to minimize Reuben's crankiness? I shouldn't try to go out of the house during his nap time. Did I leave the gate open on the steps? How can I be mad at him for trying to explore? Do I not want him to climb the couch? I can easily remove us to his play room or go outside for a bit until he (and I, lets be honest) calm down. Do I want him to have an easier morning? I need to stop whatever I am doing when he wakes up and breastfeed him. It helps him calm down and wake up easier. It's a minor inconvenience for me (I'm usually blogging/editing/knitting and thus have to stop) but it makes the morning with him so much smoother.

I've had such great success by shifting his world around him instead of trying to shift him. He's thirteen months old. He doesn't have much patience yet, through I do hope to teach him some as he gets older. I, however, am an adult.

I don't know why I expect a little boy to be consistent like an adult or be able to discern from right or wrong as an toddler. I mean, he's barely hatched. To say it out loud makes it sound lame, but that is how I was treating him. And it did nothing but escalate our family into frustrating parent-child circumstances.

Parenting. Where your child teaches you things.

(someone please put that on a shirt)