You read all sorts of articles about accepting your birth. I've heard moms talk about how hard it is to come to terms with their c-section when they wanted a vaginal delivery, and many other moms struggle with many other types of birth that did not go as expected. And while these struggles are totally normal and true, I personally do not have issues with Reuben's birth. However, pregnancy? Can we talk about how much I battle within myself to accept my pregnancy?

First there is the guilt. Guilt over not enjoying something I wanted so badly--I mean, we tried for two years to get pregnant and I had 3 miscarriages. This feeling continued to eat away at me until I realized I really only wanted a baby. Pregnancy may be one of the many roadways to achieving this goal, but hating the path doesn't mean you love the finish line any less. 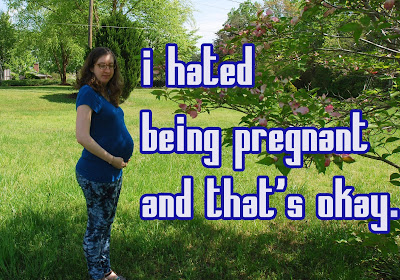 I am also annoyed by the constant reminders of my pregnancy. The crisscross of stretch marks on my belly. The utter devastation of my core ab muscles. I'll forget about it for a little while, until I take a shower or use the bathroom--and there it is. I can't escape, and it gives me night terrors. Literally. I wake up to nurse and realize that I'm not pregnant anymore and the chorus of angels around my bed sing hallelujah and my blood pressure lowers. I mean, everyone told me I would forget birth. And to a certain extent I have. But I can't forget for a second what it was like to be pregnant and how much I despised it.

The thought of being pregnant again makes me want to run screaming in the opposite direction. Yet I want more kids. How do I merge these two emotions? Can I merge them?

It took me 8 weeks to realize that it is totally and completely okay to hate pregnancy. I mean, I really hated the whole thing. I hated the first six weeks because I was sure my baby was going to die. I hated the next 7 weeks because I couldn't leave my couch from morning sickness. I hated both food and pregnancy in the second trimester because nothing sounded (or smelled) good and my clothes didn't fit. I hated the third trimester because I looked like a whale, everything hurt, and I was hungry all the time. I hated going to the doctor. I gained 50 pounds, and you can imagine how I felt about that. Sex hurt, and I didn't know why. I continued to hate throughout the last four weeks because I was utterly convinced I was going to be pregnant forever.

My hate confused me. Wasn't I supposed to be glowing, or something? Shouldn't I be frolicking through Target buying baby clothes and pricing strollers? Instead I felt like a tired beached whale with cankles and an irresistible urge to scrub my refrigerator.

I don't know if any of you knew, but I suffered with depression during pregnancy. Postpartum depression? Nope, not a speck of that here. But depression with pregnancy? Yes. My doctor and a few friends say this can be normal. My emotions were crazy. I was a mess. I remember in the first part of pregnancy--the I'm-sick-all-the-time part where I lived on my couch and tried not to throw up--crying almost every day when my husband left for work until he returned. He was a welcome distraction from The Hate.

I've finally come to terms with it--hating pregnancy. At first I just tried to ignore it, like the elephant in the room. You know, everyone coos over the baby--but not one person has congratulated me on surviving 9 months of the hell that was pregnancy. But it's true. I survived, and I don't have to pretend I enjoyed one second with it. I hated being pregnant, and I am okay with it.

So what am I trying to say? Mostly that it is okay to feel however you need to feel about being pregnant and to take as long as you need to heal, emotionally and physically. I'm still coming to terms with those 9 months, and not only because I had a baby.