This is part of my novel, "What Losing You Did to Me". To start at the beginning, click here. Right now a new section of my book posts every Tuesday and Thursday.
-----------

Cielen stands, stretching. He reaches for his breakfast and yawns. "It's a late morning." He says, smiling at me. I'm still pondering our last conversation. Maybe what Cielen says is true, perhaps I do blame everything on myself.

"I'm going to shower and get dressed. I'll let you get ready after that--and we can meet in the lobby." I nod, picking up a stray banana from my tray. I'm not that hungry, but for some reason my thoughts are racing. I feel like Cielen shattered my self-perception. And I don't know how to reorder my reality right now. It's to stressful to think about with all that's going on.

I put down the banana, not really hungry. Stress always makes me feel so out of control, so vulnerable. I hate it.

I close my eyes and drift into a lazy nap, not quite asleep but not awake. It's a peaceful state where I just let myself rest, pushing the past down and trying not to think of Aainn. It works. When Cielen emerges from the bathroom in clean but wrinkled clothes, I feel much refreshed.

"I'll be in the lobby." He says, giving me one of his half-smiles, his hands combing though his hair.

When I hear the soft click of the door lock behind him, I stretch and pull of my clothes. The hot water feels wonderful, and I take my time towel drying my hair and selecting my outfit. We are going to a party--my first real college party. I need to look the part, and I want to wear my own face, for Mai. Good thing all I really own are tee shirts and jeans right now. I hadn't exactly packed for a vacation when I'd left the North. I'd more like grabbed what I could and just came, anxious to see Aainn. I pull on a purple tee with long sleeves and a pair of skinny jeans. Standing before the mirror I stare into my eyes, my lashes still a bit damp from the shower. I do look sad. And hollow, somehow. Oh well.

I change myself into my blond counterpart, thinking that I look a lot like Mai's friend--what's her name? The one who took my place in my house that awful day. Perhaps I should wear her face. Mai had said she never wanted to see me again, anyway. I play around with my image until it's as close to Carri's face that I can remember. I hide Carri's face under my usual spell---a glimmer within a glimmer. I can shed my top layer at the party if Mai is proving difficult to talk to, or switch faces quickly if I need to disappear in a dangerous situation.

Cielen's enjoying an ice tea in the hotel restaurant when I meet up with him.

"We have nine hours until the mall closes." He says. "Want to walk around campus again?"

The hours pass quickly. Cielen takes me out to a Taco place and I eat two fish tacos with some kind of spicy sauce on them. They are good. Once our bellies are full, we walk around campus, scouring Aainn's building, making our plans for Wednesday. The nervous butterflies return, but Cielen's calm voice reassures me. There is a note on Aainn's door that Thursday will be his last office hours before his vacation. He has the exact times listed that he will be available, as well as a list of assignments that his students should make sure are turned in. A TA will be taking over his classes for the month he will be gone.

I smile. He'll spend that month with me.

Just before 9 we head out.

"I think we should attend this party separately." Cielen says, just as we are about to exist campus.

"You can arrive first, Merienge. We can pretend not to know each other. That way if you need help..." His eyes are looking right into mine.

Cielen nods. "I'll glimmerspell myself. You head on out now. I'm going to hit the restroom and work some magie."

I gulp. The thought of being alone even for a few hours feels my heart with unease. Cielen winks at me, turning to walk back towards the campus buildings, his hands in his coat pocket. I turn away. The silence is a dull roar.

The walk to the mall is quick and before I know it I'm standing in front of the Hookah store wondering what I'm doing here. The clerk inside sees me, and his eyes light up. He says something to his friend, and they both laugh. I feel my face turning red, even through I have no idea what they are saying.

A few minutes pass. Two more girls appear, both wearing black. One has tattoos, the other has a nose piercing. They are furiously texting on their phones, there pale faces hovering inches from the bright screens.

A group of males show up. One of them seems to know the girls well. They smile at me.

"Yeah." I say. "He invited me." I point inside the store, where my "friend" appears to be counting the till while another guy sweeps.

"Cool." Says the blue-haired dude. He turns to his buddy. "This is Colin. I'm Nate." He looks at me expectantly.

A few more people show up. They are laughing and talking among themselves, swapping stories and jostling one another. I feel so out of place.

"I'm glad you came." It's the clerk. His black hair is swooped low and he's wearing another black band tee-shirt. This one says "The Screaming Turtles". He catches me looking.

"They are a great band. I'll loan you a copy later." He smiles at me. He's kinda cute, if I wasn't already, well, married. And if I had a thing for greasy goth boys, which I most certainly do not.

Oh, the things this trip is teaching me about myself. I sigh.

"My name is Logan." Clerk-boy says. He seems to have taken my sigh as a sign that I'm bored, and he needs to talk. "I already know your name. Nate told me."

"Nice to meet you." I say. Logan laughs at my formal language.

The lights in the mall are dimming. That must be everyone's cue to leave, because they all start rambling towards the back exist. As we turn I catch Mai's eyes, near the back. Her face is pale white and a boy--the one who was kissing her a few days ago, has his arm around her. She's still very pregnant. He's leaning into her, whispering something in her ear, and Mai is nodding, her eyes wide.

I look away when Logan taps my shoulder. He's to my right, his long legs matching my easy stride.

"There is so many people here!" I say, trying to think of something to say. I don't want him to realize I was once again watching Mai.

"Yeah. All the regulars. The Crux is going to be full tonight."

"It's a club down the street from here. My friend Nate bought out the basement for us a long time ago. He owns the tattoo parlor across from Campus."

"You'll like it here." Logan says. "It's a good town---I mean, it has it's downsides, like that grumpy old man who tries to run the place."

My ears perk up.

Logan nods. "You know him?"

"Yeah, doesn't everybody?" Logan says. "That old prick has everything he could want yet he tries to run this town like his word is law. We would all be better off without him."

I don't know what to say to that, so I just make some kind of noncommittal noise.

"He's sexist, for one. Doesn't let many women into the college. I don't know, he just gives me the creeps, you know? All the guys say the same. Actually, we thought you were following his granddaughter the other day--but I convinced the guys it was just a mistake."

"He has...he has a granddaughter?" I manage to keep my face straight.

"Yeah. I sort of know her. She's friends with my coworker Thayten."

Friends? I remember the sucking sound their lips made when I'd spied on them in the back of the shop.

"No... not exactly." He says. His eyes roam back to find Mai and Theyten. "You'll have to ask her about it. It's some story. But don't say I didn't warn you."

There are even more people inside The Crux. I'm suddenly squished up against two redheads in the back of the club. Logan pulls me aside. 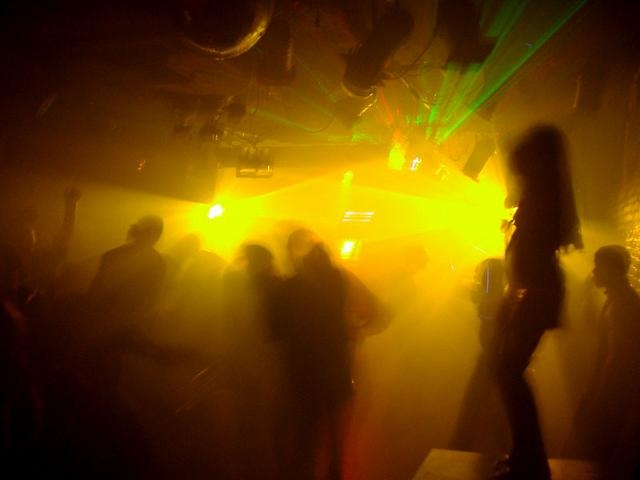 "It's crowded in here!" He yells, over the noise of what I presume passes for music in this place. More people are piling in behind me. I follow him to a wall.

"I'll be back later." Logan says. "Gotta make a beer run. Enjoy yourself. Thanks for coming!"

I'm surrounded by a sea of people in black, drinking and dancing, their voices overlapping each other, each person trying to be heard over the heavy metal band. I make some kind of face at Logan, and he takes it as affirmation to leave. I see his back disappear into a knot of people.

I start to look for Mai. Where is Cielen, anyway? Goodness knows he'd have a hard time finding me in this place. I drop my first guise and assume the face of Carri, pushing through people, looking for Mai. I don't see Carri here--perhaps her face will help me find Mai.

Suddenly a hard hand grips my arm, yanking me almost off my feet.

"What the fuck." A voice says in my ear. "What kind of sick joke is this." I can't turn my head to see who is behind me.

"Let go!" I say, trying to twist around. The hand just pushes me towards the back of the club, through the dancing crowd. A door opens and I am shoved in. Whoever just grabbed me closes the door as I turn to face him.